﻿Chances are high that if you are a kid of the 80s, one of your first contacts to the world of video gaming was in the form of a Game & Watch game. If this name shouldn’t trigger flashbacks to black and grey gaming action with noisy beeping sounds: This was one of the most famous series of handheld electronic games. All of them consisted of just one game, which ran on a somewhat tiny LCD screen (think old pocket calculator), were the sprites appeared in predefined places. While the detailed cut-out characters were far superior to the very blocky graphics of contemporary video games, the lack of freedom of movement made for some very basic game concepts – most of the time you just had to jump between more or less safe spaces. As primitive as this might sound, back in the days they were actually pretty entertaining and handy too. Just imagine carrying around your games in palm sized plastic cases instead of being stuck with one of those old desktops! Besides at a price of 10-20$ they were actually affordable for kids and teens.

A decade later, with the rise of more versatile handhelds like the Game Boy or the Game Gear, those single game thingies with their shallow gameplay were more than obsolete. Yet someone cared enough for them to come up with the interesting idea to port them to the newer systems, which led to the creation of Game & Watch Gallery 2.

Now, how does this work? First of all you get an more than accurate recreation of the original games, which looks and feels astonishingly authentic. You get the weird looking black objects and characters on a more colourful (i.e. mostly green and brown) background, an almost perfect imitation of the bleeping sounds, together with the simple, but streamlined controls. Taking on such tasks like fending off an endless horde of moles, running to the tool shed under a rain of tools or just juggling, all of them at ever increasing speed, is still a lot of fun. The only things missing is the clock (the original games always had one) and in the case of one game, Donkey Kong, a proper upper screen. Originally the latter had two screen, which is kind of impossible to implement on the Game Boy, so they went for a tiny upper screen above a larger lower screen, which isn’t all that helpful, but the game certainly is still playable. However, the developers didn’t stop at that: They created an updated version for each one of the games, with a more modern Game Boy style (featuring the familiar Mario characters instead of the nameless guys) and some slight improvements to the gameplay.

So, in total you get 12 mini games which might sound a lot (for the Game Boy that is), but there is a downside to this: Most of the Game & Watch titles are very much alike. Almost all of them involve catching or dodging certain items. There are some twists to this standard pattern (like object getting stuck for a short period of time, or having to reach certain places on the screen) and at least the design does its best to make it look like you are playing a totally different game, but if you take a closer look, games like Parachute (catch people dropping out of a helicopter), Chef (catch dropping food in you frying pan) and Helmet (dodge dropping tools) are very much alike.

And that is were the new interpretations really start to shine. They expand the older games with enough new features to make the updated versions a bit more sophisticated and distinguishable, while keeping the core gameplay untouched, so you still recognise the precursor games behind it. Mostly those are well thought additions, which fittingly develop the basic ideas to a more interesting level. For example: In Chef instead of just keeping the food from falling to the floor, you now can feed Yoshi with it for extra points and even lives. Or in Parachute instead of some featureless guys you have different Mario characters dropping out of the air ship, which fall at different speeds. In Helmet you can collect some coins, which slow you down, but give you extra points, when you reach the door. And Donkey Kong almost plays like a Super Mario Light game now.

But there is also a lot of other, smaller features, that show a great deal of care and dedication and might keep you motivated beyond just reaching an ultra high score. Like a pause and save function – you can even turn off your Game Boy and continue your current game at a later time – an extra hard mode for each game, a music studio, where you can listen to the game’s soundtrack, hints for the games and some rather cool secrets, you better find out for yourself.

Overall I think Game & Watch Gallery 2 is the perfect example for a successful fusion of nostalgia and innovation. The classic versions serve you urge for the good old days, while the (more) modern versions put an interesting new twist to them. If you are curious about the Game & Watch games, or just can’t find any working ones anymore, this is certainly one of the best ways to play them.

Actually I didn't notice those similarities in the gameplay until I wrote the review, and had a more 'ciritcal' look at all those games. But, as I wrote, normally they did a decent job of disguising them, so normally you wouldn't mind.
Mr Creosote:

The first two games of this type I owned were…


The funny thing was that I still played both quite extensively. Seems I was able to 'get into' the themes well enough to overlook the similarity in the gameplay 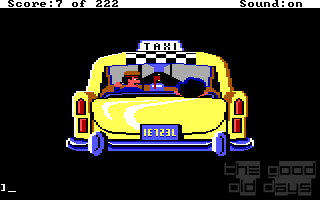