Myth: History in the Making
for ZX Spectrum 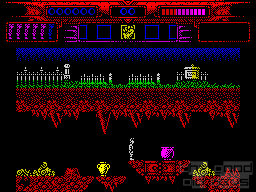 A magical journey through time would be the theme of this yet another great game, and particularly its ZX-Spectrum version. You, a brave lad with adventurous spirit embark on a mission to fly back in time and change the course of history which was maliciously altered by an entity called Dameron, solve all the puzzles, defeat the dark gods, who prevailed with help of Dameron in the alternative past, and finally face the demon himself in a vicious battle, which must ultimately determine the fate of mankind and the entire Universe!

Alright, I'm not sure how exactly you go back in time, whether using a time machine or some kinda magic spell, that I can't really tell, as I don't remember it mentioned anywhere, but… for some reason you happen to find yourself in a spooky underworld, which looks like a little oversized family vault (you can clearly see graves and tombstones up on the surface), where the family members couldn't rest in peace and decided they wanna take a walk outside their coffins and assault a few uninvited visitors. Believe it or not, your quest for world salvation begins right here, in this unholy dump. Well, what can I say… good luck, soon-to-be hero.

The game was released in 1989 (some sources claim 1988) by System 3, for all most popular game platforms of those days, namely ZX-Spectrum (our reviewed version), Amstrad CPC, Commodore 64, Amiga and Atari ST. What strikes me is that the game was dramatically and exclusively modified for virtually every platform listed above. If we estimate the change ratio in percentage for all platforms, using Spectrum version as a springboard then we get the following: CPC – 5% (almost excluded since it'd always provide little to no modification), Commodore 64 – 30%, Amiga/Atari ST – 60%, and that includes everything: graphics, animation, stages, main character, additional characters. The differences are indeed quite enormous. Oh well, we'll just have to stick with Spectrum version, which in turn had 48 and 128kb versions. Old speccy user knows what those are. 48kb version offered base audio and strict level-by-level tape loading in case of large games, as opposed to 128, where the sound was greatly improved (I never liked it personally, though) and which would load entirely into the memory and you'd never have to “press play on tape” every time you pass a stage.

The overall scenery, animation and graphics of the game hit mark 10 out of 10, unquestionably. For old-school era, that is. When I first saw it I was quite impressed, as it was unlike anything else I'd seen before. Well, surely the atmosphere and the subject of the game were by no means unfamiliar. I'd noticed that many Spectrum games shared quite a lot of similar aspects, many of which included time transition, usually starting with the past and aiming towards the future. The same exact element is employed in Bombjack, Hysteria, Renegade 3 (all Spectrum based) and a few more games the names of which I no longer recall. However, even with this shared idea Myth still remains a fairly unique and breathtaking action/adventure game, which has definitely a lot to offer to your imagination and simply good time.

On every stage, some of which assume traditional time periods featuring ancient Greece, Egypt etc, there are numbers of related characters such as vikings, greek warriors intermixed with mythical creatures, ghosts, demons, of the supposedly related time period (which is again, a very common move used by many game companies of those days), and sometimes totally unrelated, which is, as always, aimed to add this peculiar gloomy/fantasy feel to it. Naturally, all those things are sinister, evil, bloodthirsty, as any other creatures from remote ancient times. For some reason many games suggested this bizarre idea, and not only Spectrum based. Although, the reason of our game here is provided above, still… why does history always have to be supernaturally evil?! Oh well, it never seems to get old, so let's just accept it one more time, shall we?

Your character has quite a satisfactory set of capabilities: he can run, jump, crouch, use low kick to break chests and other containers to retrieve valuable objects, use bare hands to attack things (futile mostly, nevertheless cool feature) or use a weapon instead, which varies from stage to stage. The tasks, as usual, aren't as difficult to perform as to find out what they really are. Once again we're facing the old Spectrum issue of unsolvable mission, due to total lack of any additional information whatsoever, normally obtained from other characters, or some sorta narratives and such… Zero. I suspect that some of those things were, once again, mentioned in the booklet which must've come along with the tape, but since I was a proud owner of a pirated copy, I received none, which means I was to deal with all the puzzles myself. Oh well, I did actually have an instruction for at least the first stage, but I never really played it all the way through, and some stages were probably missing on the tape, which was a typical case with pirated copies. It works? Well then, enjoy! Anyway, the tasks to pass the first stage were quite intricate. For example, would you ever guess that in order to kill the dragon you have to use a special weapon which takes you to kill the demon whom you have to raise from the fiery pit by dumping down 13 skulls of the “killed” skeletons?! Ooops, I think i've spoiled your fun! Nevermind, you'd never have figured it out yourself, have my word on it

In conclusion I'd like to say that this is definitely one of the best games ever made for Spectrum, which have become legendary and fully representative of its own era and platform, so if there were a compilation named “100 Great Spectrum Games”, I would most definitely include Myth among them.

Just watched the Longplay and this one actually looks really decent. Especially the animations look nicely fluid considering the age (certainly shows again that I tend to underestimate the Spectrum). And yes, fighting ancient evil beings has to be one of the #1 tropes of every game featuring time travels. Dark times indeed.

Moebius:
Feel free to share anything about Myth: History in the Making (1989) here!
[Reply] 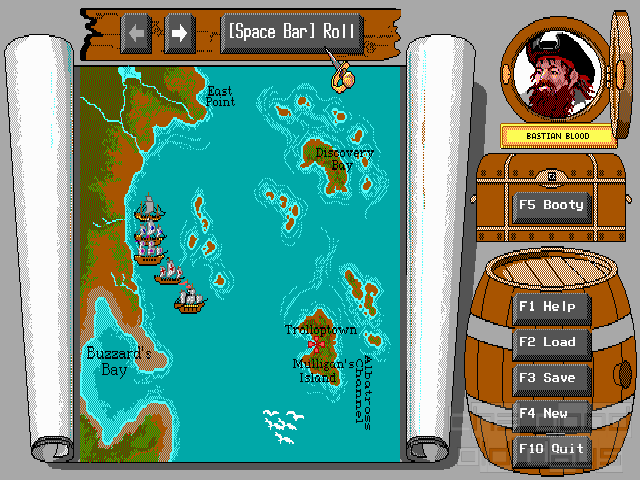