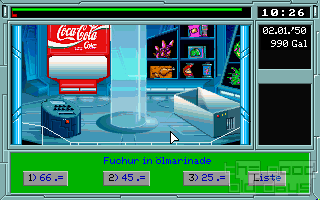 Life simulation games have a special charm: On the one hand you go through your motions from day to day, on the other hand you want to escape it by having a go at the motions of someone else. So, you kind of ask yourself what it would be like to replace your daily routine with a more exciting one from somebody else. And that is the crucial point of the genre: Is the virtual life different enough to entertain you? Has it got enough distractions to offer, at least for a short while? For Space Jobs the answer is clearly no. Because although shows signs of some promising attempts, they get lost in a maze of advertisements, half-done ideas and programming bugs.

Since it is a promotional game for Karstadt (a chain of – once very successful – department stores in Germany) the advertising comes at little surprise of course. Yet the world they chose to place it in is actually rather unusual. Probably thinking that a Sci-Fi world would be simply cooler, they set the game in space, i.e. the single departments take up a whole planet in this turbo capitalistic Utopia (or depending on your taste Dystopia), which is ruled by the eponymous company. The three (cloned?) directors, naturally all of them are men, belong to the very few human beings you get to see. All of the other creatures you meet are either aliens, cyborgs or robots.

But don‘t panic: Companies like the world’s largest soda bottler or a producer of photographic materials, who almost went bankrupt by now, have found their way into this brave new world and provide some familiar advertising spaces. Yes, you read that right: This is a promotional game, which does not only advertise the original sponsor, but a couple of other trade marks too. If it was not for the slightly satirical touch of the setting, all of this would feel like a beefed up leaflet. Fortunately the humour is one of the things which the designers handled pretty well, so the game does not degenerate into a primitive sales pitch. Still, you will have to bear the one or the other low pun (e.g. just take a look at the film titles).

So much for the background, let us take a look at what this setup is actually used for. Broadly speaking they tried to recreate the everyday life of an employee, who starts as a small number and wants to work his way up to the top. You will have to manage your work-life balance, that is you should avoid either overworking yourself as well as attracting negative attention for being too inactive. If you dutifully complete all of the mini games assigned to you, you could be promoted one day. A couple of simple statistics should help you keeping track of your health, workload and career progress. So far so good, but things do get a bit messy as far as the actual implementation of those ideas is concerned. In theory all of this sounds like a proper concept in a unique setting, but at the end of the day the massive amount of relatively small faults, which can be found almost everywhere, add up to a major annoyance. To illustrate this it is probably best to take a look at your typical day as a neo-employee.

Young and ambitious, like you are, you want to join this hyper-mega-large concern (probably because you have not got much choice anyway). So after an interview with your new boss you are assigned to a department. You immediately jump into your space ship, dashing into a future of mildly exciting tasks. Such as tidying up: A rather trite memory game in which a couple of objects are removed from the screen and you have to place them on their proper dust gathering spots. Or how about advising customers? Just never let up, always recommend something else than what the customers originally asked for and in case of doubt always remember the mantra: ‚The scrap value is enormous!‘ But the ultimate bore has to be assigning price tags. The most entertaining thing about this task is how obsolete it has become by now to look up each and every price in an overly long list, instead of letting a computer do it.

If you are working in the central warehouse, or if you just have to kill a couple of hours, you can give a clone of Soko-Ban a try, which could almost be called the highlight of the game. At least it never crashes (more on that later) and the great – even if not all that new – design makes sure that the formula job + fun = game actually works. Another job is almost the opposite, so much so that I almost forgot mentioning this awfulness: waste separation. Carton boxes and plastic barrels go by on a conveyor belt and you have to press either the K (like ‚Karton‘, the German word for carton) or the P key, depending on which one is passing the check point right now. Keeping awake seems to be the biggest challenge here. Overall you have to grant all of these tasks, that you can (more or less) choose freely which one you wish to tackle next and that there is a certain amount of variety.

If you want to relax after a long day, in which you watched the minutes (not) go by longingly, you get to know a very frustrating side of the game: Everything that has anything to do with fun or entertainment is just a big waste of time. The cinema really takes only 2 hours of your life, which you will never get back, food will ruin your health (at best) and you will lose more money in the casino than in real life.

Yet all of this pales in comparison to getting in touch with someone from the other sex. It is more than obvious that there should have been something, that you should have been able to date someone, but the critical parts are missing, i.e. they have not been implemented. You can train in the fitness studio to become more attractive (it is up to you judge the hollowness of this sentiment), but in the end things always play out the same at the bar: You either dance with exotic creatures from strange new worlds until it is closing time, or you earn a couple of #@*$#% calls for asking someone to come over to your place. The gift shop, which will only deliver to persons unknown to you, will always respond with the same message about your presents being declined. And that is the final nail in the coffin which turns everything connected to relaxation into just one thing: a grave for your money.

Disappointed like you are by now you are probably considering to do something for your education instead. So, how about registering for a course at community college? The topics sound a bit unusual, but promising nevertheless, and the one or the other extra qualification should help your climb the career ladder. Well, too bad that after stressful weeks of trying to co-ordinate your working and learning hours with each other, you will get to see the ugliest side of the game: the crashes. If you are ‚lucky‘ the course will end when it should, instead of just going on endlessly, and you will be sent a certificate. And that one packs a serious punch! For it looks like the teacher’s computer has sent you a fatal virus, so each time you try to open your mail the game will crash (occasionally you might even get an error message). Alternatively, in some rather rare cases, you will only see some gibberish (probably the wrong memory area, or the cat just wandered over the keyboard).

But that is just one example out of many: There are lock-ups while assigning the prices (which makes this tedious task at least a little bit more exciting: can you finish your job without stumbling over the Anti-Grav Gel, or will you have to restart the game?). Sometimes the useless gift shop carries segmentation faults and the repair-bot loves to forget that you ever had a space ship (or maybe he wanted to earn some extra cash by taking it across the border into the Walmart system? Who knows…).

Yet, by far the worst error source, the one that actually ruins the game, are the bosses: If you work hard enough you will be asked to try a different department. Too bad, that the entry mask for choosing one of them is bugged in such a way, that you can only use the keyboard to do so. And even then one of them cannot be selected after all. It is hard to tell, whether it is the central warehouse or the general store, because whatever you chose your boss always mentions the other. This might also be the reason why you will get sacked for being unreliable, no matter how hard you try to give your best. You can never reach the game’s goal, which would getting that promotion to head of department. Instead, after always being fired, you will be shot into a black hole.

You could say that this game should be shot there too, but this would be a bit unfair after all. The real disappointment about Space Job is not that it is such a mess of a game, but that it makes so many promises, yet it keeps almost none of them. You can definitely tell that the designers had high ambitions to create a great game (that is for a promotional title) and that they have shown signs of a certain creativity. At the very least you notice the effort that went into its creation. Karstadt even worked on a big advertising campaign (e.g. I remember a complete page in a gaming magazine dedicated only to a contest for the game’s release). This proves together with the fact that the game was sold and not given away for free, that they were convinced to offer a bit more than the cheap promotional titles from their competitors.

You can tell that the game had potential, so much so that you have fun in the beginning – despite the rather banal tasks. But then you witness the first couple of crashes and bugs, which soon start to pile up, and you become disenchanted. As soon as you start to realise that parts of the game are simply missing and that those parts that got implemented are somewhat boring, you get the impression of visiting a Potemkin village: It is (almost) just façades. That plethora of bugs makes you wonder whether some of the game’s features were designed so badly in the first place or whether they were ruined by clumsiness. It really looks like there was a deadline to be met, which meant that a lot of ideas had to be dropped.

The things that keep Space Job from the fatal crash are for one the wide variety it has to offer, so at least a couple of ideas work well enough to entertain you. And for two the included Sokoban clone is a rather decent – although not overly original – game in itself. If you want to you can even create your own levels for it by editing the SOKOBAN.BIN file.