The Great Giana Sisters
for C64 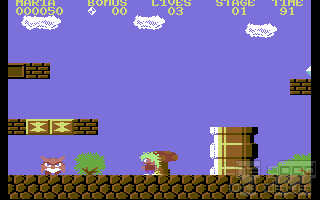 Every C64 owner knew it, everyone played it and enjoyed it. The Great Giana Sisters. The ultimate Jump & Run Game for this good old computer. Great graphics, many hours of fun, lots of level....so nobody is asking for Super Mario Brothers, Nintendo´s contrahent. In fact, we rather like to play with women, don´t we ?

But step by step. The game takes you to a fantasy world, in which you go hunting alone or with another player (in change) for diamonds, to get as much points as you can (diamonds are womens' best friends). Hunting?

Well, at the beginning you rather have to be careful, because you are not alone! Different animals, from scorpions and bees to giant spiders and flying dragons, make life hard for you. And your character, the little Giana with blonde hair and pony tails (the second player has to cope with Maria, it's her twin except that she has green hair) is all but scary. But she does not have to be, because it is a jump & run game. So get your joystick und let´s go.

Giana and Maria can do new tricks by collecting different things. Starting with lots of haispray (hidden in a ball) turning her childish hair style into a lion hair style to burst stones. By collecting items like lightnings, Strawberries and similar things, they are later able to shoot. to stop the time to walk through fire or do other tricks. A lollipop gives you, just like 100 collected diamonds, a sweet extra life. But if Giana or Maria dies, the items and diamonds are lost!

A litle disadvantage: There is no possibility to save your game. That means if you are game over after 28 of 33 level, you have to start again. But maybe you discover one of the secret level transporter, which teleports you, without using cheats, some levels forward.

The game is simple, but it brings hours of gaming fun with it. The lovely graphics (pixels have feelings, too) and the great music makes The Great Giana Sisters to one of the best games ever played on the C64. (Mario? Who is Mario ?)

Nevenbl:
I finished this. Yeah
Dr. Ramesch:
Feel free to share anything about The Great Giana Sisters (1987) here!
[Reply] 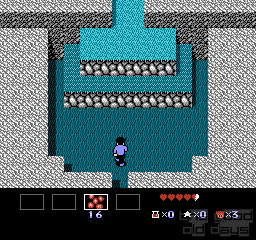