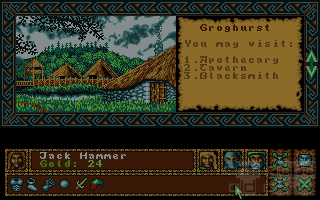 I have to admit that I'm biased. In the good old Amiga times I haven't played any game more than this one. After discovering it again I was instantly caught by its old magic. The land of Trazere is swept by the waves of a mighty evil's dreams which flood the country. By hacking through dungeons the 4 heroes gather experience and get ever closer to their goal...

The 4 characters have different profiles and each a special ability (Berserker Rage, Bardish Melody, Hide in Shadows and Cast Spell) which makes them quite individual. Basically all party members are by their means useful. The barbarian tends to dominate especially at the beginning whereas the bard doesn't play a big part during the whole game. You can't edit the profiles during creating or advancing the characters but at least you can assign them to one or more of the four elements which has an impact on several stats. In Legend characters may die as long as one party member stays alive so he can revive the others in temples or by certain spells.

While the combat mode isn't very convincing (you can't click directly on enemies to attack but rather have to move close to them and switch to battle mode) the spell system is IMHO excellent. I daresay that it is the best of this genre EVER (yes, even better than Diablo!). You start with 3 runes (Missile, Heal and Damage) and you can acquire other runes from the 'Ancient' (for example Vicinity, Slave, Revive...). In total there are 4 direction runes and 12 effect runes with which you can create your own spells! So let's take Missile+Damage+Vicinity+Damage and you get a missile which damages the point of impact and all surrounding hexes. So there's an infinite variety of spells and the wizard can memorize up to 10 of them. As there's no mana, all runes rather require one or more ingredients (Phoenix Claws, Night Shadows...) which can be bought in certain shops.

The whole game runs in real time, in battles, which mostly take place in dungeons (but you can also attack wandering armies) as well as on the map where several moving banners can be seen. Other nice features include a good automap, very comfortable menus, the option to let the whole party gather or attack with one mouse click and its HUGE content (considering the whole game is just 1MB big).

The downside of this game is clearly the lack of background story. The introduction is just a few sentences long and basically you don't know throughout the whole game who you are and what you have to do as explanations are very scarce and mostly related to a puzzle.

For a game of this age Legend is surprisingly user friendly but some things surely could have been made better. After some time it's quite annoying to have to activate 'Berserker Rage' and 'Hide in Shadows' and switch to battle mode again every time you enter a new screen but you'll get used to it.

All in all Legend is an underrated classic and highly recommendable to fans of Hack 'n' Slay games.

Dommie:
Hey, im stuck in this game, if anyone knows of a walkthrough or has completed this game recently and can help, can you give me an email please dommie@easy.com, thanks - dommie
Riccardo:

The first and the best role play game I've played!!
My original disks was corrupted and I'm very happy to have found it here!

Could someone tell me if is on the web (may be in .doc or .pdf format) the "legend Hintbook"? with all the maps and weapons/ingredients cost and rates?
..please...

Mike:
HOLY COW! I've been looking for this game for months. I couldn't think of the name of it for the life of me, so i felt my searching was in vane, until i came across your site. The second i saw your screenshots it all came back to me. I've been on all the other abandonware sites and i couldn't find a thing about this. Thanks for such and awesome site.
John Darbyshire:

Being one of the Atari loving clan i went out and bought this for my first PC when it first came out and it rocked my world. What a game it has everything puzzles monsters and mayhem

Thanks very much "Good Old Days" for re-introducing me too this excellent classic. John. 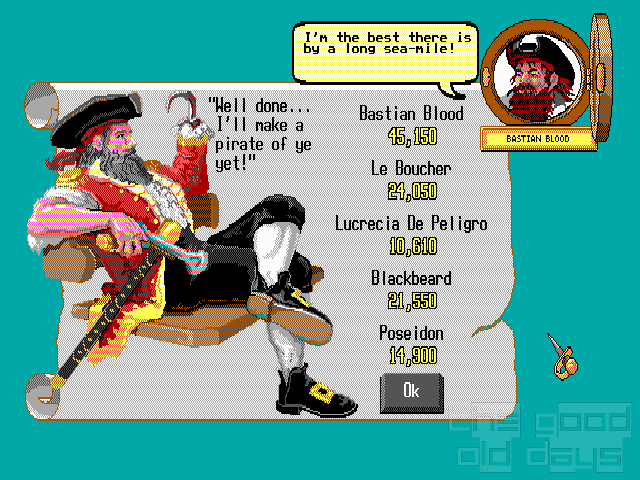