You didn't expect to read this on a website called The Good Old Days, did you? No, I haven't gone mad and I'm not even joking: I do believe that 'retro' is an inherently stupid trend and I hate how this site is usually interpreted as belonging to this niche. Because TGOD has always been intended in a different way. Surprised, shocked, confused? Read on!

The Implications of Being 'Retro'

What does this term mean anyway? The original Latin prefix simply means 'backwards'. There is an ambiguity in that which sums up my conflicted feelings about the conflated use of the words in modern times. On the one hand, it could mean 'looking back'; there is absolutely no harm in that. Quite on the contrary: Being aware of one's origins is a most important part of our cultural and personal identity. This is certainly a major part in the motivation of creating this website as well.

It could, however, also be interpreted as 'wanting to go back'. This is where pure nostalgia literally comes into play. To a certain extent, this is only human as well: Certain things, like for example older computer games which one played in one's youth, can have a subjective, fuzzy sentimental link to more innocent and carefree times which one remembers with a smile. So far, so good – as long as one is aware that those are just connotations, emotions and memories.

Two things can, and often seem to, go wrong here. One type of person is the retro fetishist who actually wishes she could go back. Since this is not possible, her whole life revolves around only trying to recapture those past times. Life in the present? Only exists as far as it cannot be avoided (or as far as it serves those trips into the past).

This has a whole host of negative implications. Since nobody actually can go back, these people are stuck in a loop of futile attempts to recapture moments which only becomes more and more frustrating. First, because the feeling will never be quite the same again: Since, as mentioned, the connotations can never be reproduced, it is nothing but a shallow recreation. Second, every attempt might actually detract from the original experience: Because new connotations, which are not as one-sidedly positive, are added to the original ones, the memory's value is diminished.

Blind to the New?

Third, and this may appear obvious, but it seems worth mentioning anyway, everything which is not 'old' and 'retro' has once been new as well. Here, we have to distinguish between two sub-types again. Both are distinguishing perceived value by their own lifespan, but the borders are drawn differently.

The one discussed before usually sets the border at the end of her own youth. What they experienced in their younger days is considered good, everything which came after is not interesting or even insulting. This is human, but strange, because it is so utterly subjective and random. A person just five years younger or older will have a completely different perception of value already.

What they (i.e. we) all have to make themselves aware of again and again is that the age of things is never an absolute state. When each of us was young, we did look at these (then new) things with an open mind, but this quality seems to have become lost with age. When was the last time you tried a new game out without the prejudice of 'having already seen it all'? Or, if you believe there are objective reasons to like the old and dislike the new (other than age), try this: When was the last time you tried out a game from your preferred past time which was new to you? Not meaning trying either out with the awareness, the knowledge, the experience gained in past years. Where is the line between the latter (positive: being aware of past experiences) and the former (negative: being narrow-minded)? That is hard to tell and everybody needs to work it out for herself.

Though let us talk about yet another type of person who sets the border of relevance even further back, i.e. before her own conscious life. This is best illustrated with an example from a cultural medium which already has a longer history than computer games. Let's look at films, a medium which is also currently in full 'retro' mode with all its 'reboots' and 'reimaginations' of old stuff. The people who do not actually remember the first three Die Hard films coming out have now already reached adult age. For some reason, many of these people think they are so much better than the newer ones (whose making the same people did witness), they abhor the two more recent ones. Is there really a reason for this other than age?

Without wanting to stray into the area of actual film critique, isn't it interesting that there is very often a clear correlation between a person's age and the question what this person considers good and worthy? In particular, the answer is often that everything which 'has always been there' (i.e. has been made before this person's conscious life) is treasured, but things which came later (i.e. whose publication this person can actually remember) are not.

This might even be worse than the phenomenon of trying to relive one's youth, because it means these people are living solely on a borrowed past. They are searching for emotions and connotations which they have been told about by others with their own rose-tinted glasses, but which they have never actually experienced themselves. What could be sadder than this?

While the previous sections discussed people being too much into nostalgia, the term also has another, not less negative facet. It is the annoying ignorance not of new things, but of the very subjects of the nostalgia associated with it. It's the 'retro freak' who talks, but does nothing apart from that. This type is the predominant one in the typical meeting places on the Internet. 'Oh, yes, game X was soooo great!'

But would this person touch X again these days? It would not even cross her mind for a second! Instead, she is actually spending her time exclusively with new things which then are discarded and forgotten again once they become old (by whatever definition). Wait a minute, forgotten? How can they be forgotten if these people still talk about them?

I've used the word on purpose, because what does this kind of person actually remember? Not a lot apart from the unreflected memory that they had fun. What made it fun? Forgotten. What its significance at the time and for their lives was? Forgotten. Any attempt to remember these things? Not happening. Hence: pure, unreflected nostalgia.

To pick up on two terms from the previous sections, unreflected nostalgia and cultural identity: The former is easy; just don't drink too much and you will have some memories of what you used to occupy yourself with in past times. Yet if it stops there, what's the use apart from a momentarily warm inner feeling?

We are creatures of our past experiences and our society. Cultural works like books, films or games influence our lives. They are part of our heritage. It is no coincidence that now that the first significant generation who grew up playing digital games has reached an age where their money is worth going for, pixelised aesthetics are suddenly popping up at every corner, marketed in completely unrelated products (or used to market completely unrelated products). The target audience of a t-shirt with a large print of some past popular video game character is nostalgics. Though what would wearing such a shirt communicate? Above the tiny piece of information that the person wearing it knows the character, preciously little – nothing, one might argue.

The past is being reduced to a distorted kitsch version of itself. Worse even, by the very people who lived through those days and who should know better! What may seem harmless and funny suddenly becomes stupid. This is what I associate with 'retro' these days and that is why it bothers me.

What we should come to is a reflected view on our own past. Sure, it can be nostalgic. Nobody's asking for everybody to become a cold scientist doing a razor-sharp analysis of one's salad days. At the very least, there should be a basic reflection of what is just nostalgia, i.e. the connotation with simpler, happy times, and what might be timeless qualities which are not just curious oddities to sneer at. Also, consider how all of this influenced you to this very day. What sights or sounds do you consider aesthetically beautiful, for example? Can any of this be traced back to, for example, games you played in the past? Make the experiment and you may be surprised at the results – and learn something about yourself which you may not have considered at all before.

If your own definition of 'retro' is compatible with that, more power to you – be retro! Laugh at the oddities of the past, laugh at your own past self, but also with your own past self. It's all part of you, and there is nothing to be embarassed about. Treasure those memories, but know that you cannot recreate those times ever again, because, above all, you have changed since then. And please, just don't stop there, but continue to enjoy those things of the past which actually are good! Yes, maybe even better than most of the stuff which is new today – even without nostalgically tinted glasses. 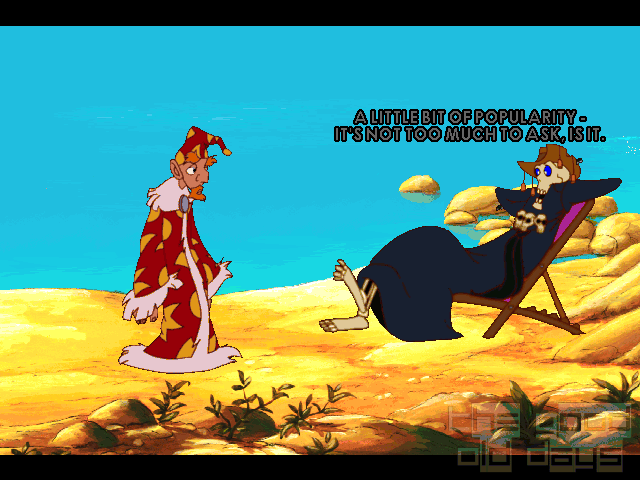