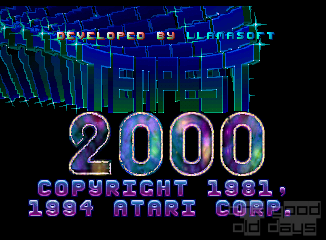 The Tempest games are really like nothing else. You control a ship that looks strikingly like a crab claw at the top of a 3D grid. Enemies travel up the grid, and your goal is to shoot down at them before they can get to the top, circle around, and drag you to the bottom. There are a handful of power-ups to collect, but these only persist until the end of the grid. These include a more powerful shot, the ability to jump and kill enemies that do get to the top with some good reflexes, and an AI second ship that patrols the top with you and fires with the same beam that you have at the time. Simple, classic arcade game play unlike anything to this day.

Tempest 2000 is a hit or miss kind of title for a lot of people, and frankly it's easy to see why. This is a game meant to be played in the arcade on a rotary dial, and the controls absolutely do not port acceptably to a directional pad. The good news is that support for a Jaguar rotary controller was programmed into Tempest 2000. The bad news is that no official rotary controller was ever released for the Jaguar, but there are plenty of people who make these on eBay if you'd like to actually enjoy this cult classic. It is important to note, though, that rotary controller mode makes bonus levels literally unplayable. Trade-offs, I suppose.

A second common complaint is that it's hard to see the action. I have no arguments here. Rumor has it in the Atari community that the visuals were designed to be “compatible” with LSD, and while I certainly don't recommend that experience, it's an interesting relic from a culture now passed. What does “compatible with LSD” mean? Well… the visuals are a bit of an over-complicated mess. I've found the best method of accurately moving, shooting, and collecting power-ups is to not focus on the screen. Admittedly not the best thing to have to do, but once you've played an hour or two of Tempest 2000, you get used to ignoring all the graphical garbage.

With those major negatives addressed, let me explain why I give this game a positive score. Simply put, I can play it for hours. Once I got over the learning curve, which is admittedly steep, I started earning extra lives faster than the game could store them. The game actually does keep count over the maximum shown on screen, so once you hit the “max”, don't worry about it. I can't tell you how satisfying it is to die a few times on a difficult grid and not have your lives decrease at all. Or, how tense it gets when you're down to just one or two lives, and manage to earn yourself a comfortable buffer again with some exceptional gameplay. It's fast, it's frantic, and I find it immensely enjoyable to sit down and just zone in to the experience. And yes, I did shell out $80 for a custom rotary controller, and the need to do that is why I take off one star on the review, but everything else is part of the experience to me.

Almost forgot! One can't write a review for Tempest 2000 without talking about the music. It rocks. It wasn't often back in the day that a game got a CD soundtrack release, but Tempest 2000 is one of the few that made that list. It pumps you up, doesn't get repetitive, and would certainly be appropriate for any rally driver. I definitely recommend looking it up on Youtube.

Tempest 2000 is the successor to the 1981 arcade game Tempest, and it is a fairly well-known and highly-regarded game. Many like to say that it completely redeems the Atari Jaguar as a console, though the Jaguar has other good games. Another big thing about T2K is its pedigree of being a Llamasoft work, a semi-famous one-man arcade-style developer stationed in the UK, big in the old computer days, and particularly known for their psychedelic styling; T2K is testament to nearly all of these things.

Tempest and Tempest 2000 are shmups, and unique among them in that they use a third-person view with a heavy dose of abstraction through an interesting “web” concept. The standard flat game field is sort of rolled up into various geometrical prisms, and the result is that it functionally behaves like a typical space shooter while also feeling very different. For the original Tempest, this combined with blazing fast action and the use of vector graphics (much like they are today, but more limited) led to an even more psychedelic experience than other space-themed games had been at the time. It should be noted that the designer associated the game with the horror genre, in no small part due to being based on nightmares he had.

Tempest 2000 takes this basic idea and brings in some hardcore Llamasoft-brand psychedelia with a techno- and trance-based edge. It also expands on things such as web and enemy variety, and adds powerups and challenging bonus levels… it even features both cooperative and competitive multiplayer! There are three major modes in T2K: the simpler Tempest Plus with various features toned down or removed, the standard Tempest 2000, and the competitive Tempest Duel. Unfortunately, only Plus has the cooperative multiplayer, though it will even let you play the game with the computer-controlled cube partner (a powerup from the Tempest 2000 mode) instead. There's also a “Traditional” mode, which is just single-player Plus with some changed graphics inspired by the original Tempest; it's not very good, and even the designer considers it to be crap.

In theory, this should all be well and good. The problem is that Tempest 2000 isn't a very well-designed game at its core, especially not compared to the original. The designer thought it'd be a good idea to have confusing levels that criss-cross and make it nearly impossible to tell what's coming and where, plus a camera that you can never position correctly for certain levels. The original game took great care to make sure that neither of these things would happen, except for the reasonable-in-comparison “infinity” web. Now, 2000 isn't quite as frantic as the original game, replacing this with outright brutal enemies and patterns; combine this with the levels, and it really is absolute hell. It's just infuriating to struggle at a game that never seems to become clearer no matter what you try, especially when it's marketed as a sequel to a game that never had this problem… sounds like I'm talking about an adventure game! Worst of all, you have to play through an entire set of baby easy levels (or start at one of the later ones, though that isn't very “fair”), and just as the game starts getting interesting is when the nonsense levels are dropped on you.

However, a game is each of its parts as much as it is the sum of those parts. I suppose I could complain that the visuals get psychedelic enough to start covering up some of the screen, but I certainly can't complain about the impressive overall graphical flair. One big gripe concerns the music though; believe it or not, this is actually the worst soundtrack of any version of the game. The soundtrack album very much fixes this problem (far too many people swear it doesn't), but you can't really use it in conjunction with the game unfortunately; something certain ports fix. But these all seem like minor things in comparison, really.

This game intentionally tries to place itself well in the negative and call itself good design. Worst of all, people eat it up because they simply don't usually care about game design and trying to figure a game out; they just want flash and pizzazz, they want an “experience”. This is a large part of why the entire shmups genre died; people want to blame it on the developers, when it's really their own fault for wanting “experiences” over “games” plus having the audacity to conflate the terms. This all would be considered heresy to many; I really am saying that other people's fun isn't good enough, that peoples' opinions are wrong… because they're not caring about the game, because these opinions are based on lies that dare to call themselves choices. Oy vey and all that. 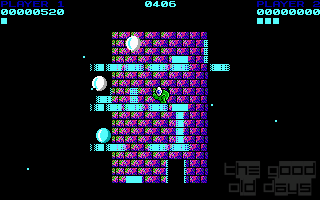