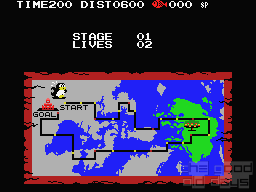 If your girlfriend were terminally ill, would you go to the ends of the world to get her a special but dubious kind of cure like golden apple? No? Well, Pentarou the Penguin would! He might even go into outer space if necessary! No time to lose now, hit the road at once and help this little short-winged globetrotter accomplish his mission safe and quick for the journey is long and dangerous and Penguette the Princess is getting worse...

Penguin Adventure is a sequel to Antarctic Adventure, and is technically an action platform racing game featuring a live penguin vehicle. You must race through a number of different environments like forests, caves, rivers, icebergs, etc., while skirting or leaping over obstacles (pits, logs, rocks), avoiding collision with various other creatures and reach the finish line in time. Some things can take your life, while others only hinder. The game is graphically identical to its predecessor but is vastly enhanced gameplay-wise.

Your target destination is an island with a magical tree bearing golden fruit. You must get there, snatch an apple and hurry back home to rescue the princess, which also doubles the length of the game. Meanwhile you must collect fish which can be later traded for various important items in secret underground stores (gun for instance) which can be entered by plunging into one of the smaller pits. You can also multiply or lose your fish by playing slot machine in the same stores, which is technically a minigame.

Special aid objects coming as floating green hearts can grant you a spare life, invulnerability or make you fly over enemies and obstacles. Bonus stage takes you into outer space where you collect... more fish! You can enter it by grabbing a floating pair of yellow wings akin to green hearts. And finally there are bosses, which though are multiple copies of one and the same dragon casting fireballs. Nothing special about that dude except different colors, just keep shooting at him till the ground beneath him cracks open and lets him DiP (Drown in Peace). Mind you, if you haven't purchased a gun by that time then there's nothing you can do, so buying stuff from the store IS necessary.

Oddly enough, while you can make it to the island and back you may still be late to save the princess and arrive to her funeral instead, which is albeit unique, but rather frustrating aspect of the game. Is there like another hidden clock besides the one given to complete each level or is it just a randomly picked scenario? Beats me, folks, but they say princess dies 99% of the time, so I figure you just have to be more careful and finish the game faster. And finishing it alone is no trifle, meaning you will have to try again, again and again.

The game is quite colourful, challenging and fun. You may get an impression that it's a child's play, but I assure you it's mean as hell. Give that modern script-driven-interactive-all-beatable sucker of yours a break and play what only real men can have the guts for: a game from the times when computer games were still games, which only a few select people could ever beat. Puts hair on your chest.