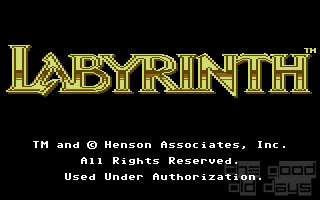 There were Adventure games before SCUMM and aside from Sierra's endless Quests. Lucasfilm's first own foray into the genre was Labyrinth - an official offshoot of the movie of the same name (starring David Bowie and Jennifer Connelly).

Movies never really make good games when converted 1:1 (where to get the puzzles from?). This game doesn't even try, but instead puts the player in the role of a guy (or girl) going to watch the movie in a theatre. The evil Goblin king Jareth appears on the screen and magically transports the protagonist into his labyrinth. The player now just has 13 hours to defeat Jareth and escape the labyrinth before he's turned into one of the mindless slaves himself.

Technically, the game uses a clever twist: It starts out as a Text Adventure, but once the players enters the fantasy world of the labyrinth, it changes to a graphical interface. Both parts use the same simple interface which lets the player construct commands in basic verb-noun format by selecting those two words from lists. In the first part, that's it. In the main part, you can see your character in third-person perspective and walk around using the joystick in addition.

Those who've been reading this site for a while know I dislike labyrinths in Adventure games. So obviously, a game which is even called Labyrinth and which is true to its name is hard to appreciate. The fact that the labyrinth is regenerated each time the game is started and that it magically changes each time you change to another room (so you can never really go back) doesn't help.

Ignoring that for a while, though, Labyrinth is quite well-done. Graphics are attractive: Characters look distinct and recognizable, conversations are visualized using speech bubbles, the backgrounds scroll perfectly smoothly and so on. The controls (as described) are completely intuitive. Only irritation (aside from the limited freedom compared to the common free-text parsers of those days, of course) is that lots of objects and characters are listed right from the start, so it looks as if you already do something with or to them - although they'll only turn up a lot later.

The puzzles aren't overly complex generally, but there are still a few which will have you thinking for some time. Generally, having watched the movie certainly helps, because otherwise, a few solutions will seem completely illogical and far-fetched to you. Not very hard or creative compared to what the genre would later become, but well within the standard of the Graphic Adventures of the time.

It also has to be said that the game is quite forgiving and fair. Although you can die in some obvious situations, patrolling Goblins will, on the other hand, only send you back to the start if you let them catch you.

If you decide to give this game a try (which you should for historical reasons alone - this is Lucasfilm's first Adventure, after all), just don't expect Monkey Island or even Maniac Mansion, and you'll enjoy it. 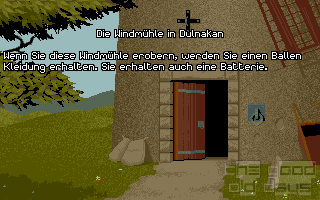