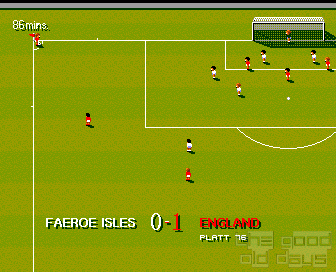 For some reason, high speed was considered the ultimate goal for sports games for some time in the late 80s and early 90s. The one distinguishing feature of such football games is ball control: Different from most football games, Sensible Soccer will not 'trap' the ball on the active player's foot. This makes dribbling more or less impossible – the ball bounces away too easily when changing directions. On the other hand, Sensible Soccer makes passing easier than normal. You can't only shoot the ball in one of the usual eight directions. If one of your own players is available in the general direction you aimed the ball at, the game will semi-automatically adjust the direction accordingly. 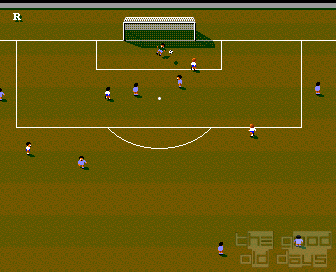 …and when Lineker scored…

This results in a style of play which now, 20 years later, is heralded as the ultimate tactic in the real-life game: Quick, short passing back and forth, as for example celebrated very successfully by the Spanish national team. Or, in gameplay term, this leads to an experience closer to pinball (with slightly movable paddles) rather than football.

Unlike Kick Off, Sensible Soccer does not allow to trap the ball even temporarily for the sake of somewhat controlled passing or shooting at the goal, though. Shooting is further complicated by the basically useful function of bending. To shoot, you press the fire button and then move the joystick into the direction you want to bend your shot to. However, if you tried triggering the shot in the wrong moment (i.e. when the ball was just bouncing away from your player), you won't shoot, but tackle – looking like a complete idiot while the ball bounces towards the keeper harmlessly (it takes ages for a player to get up again after a tackle). Or, even if you hit the ball, you might have yanked the joystick for bending purposes a heartbeat too early, sending the ball off into a completely wrong direction. 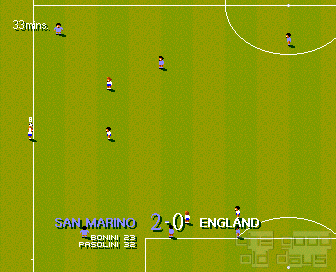 To really master this game, you will need a lot of practice. Unlike certain competitors, it is also relatively accessible, though. The basics are intuitive enough and the game encourages experimentation without planning. Even total beginners can get lucky and have one of their players running straight towards the keeper – a shot, slightly bent, and it's usually a goal. Almost all of the time is spent in front of either goal, so it's always action-packed and exciting, the matches are very fluid. Though, of course, most games will be lost at first.

It is not quite clear why (to this day) Sensible Soccer is considered such a landmark game. It is not particularly innovative; compared to previous, similar games, it simply tweaked a couple of things. The major one is said accessibility, which is certainly very important. However, this is still only skin-deep, because if you really want to succeed, better be prepared for a lot of practice sessions. In the end, all that matters is whether you like this kind of football game. If not, Sensible Soccer will not convert you.

I remember when I was a young lad and watched DOS games running on an IBM PC clone. Gone were the days where I waited 5 minutes to load a game on my Timex 2048 ZX Spectrum clone. So me and my brother frequently visited our neighbour to play some DOS games on his IBM clone.

Soon enough he upgraded from a 286 to a 386 and I wasn't seeing Grand Prix Circuit running on CGA anymore, instead watching how beautiful 256 color VGA was, running games like Dune 2, Test Drive III, Stunts, The Manager, Formula One Grand Prix and [self]Sensible Soccer[/self of course!

So we had this habit of going there and play during long afternoons campaigns of The Manager, Championship Season mode on F1GP and custom leagues on Sensible Soccer!

So Sensible Soccer changed the way football (yes football, the game where you actually use your feet to kick a ball, unlike other game which should be renamed Handlemon) games ran on computer games. Taking cues with older games like Kick Off, Sensible Soccer series became classic games that ran primarily on Amiga and PC platforms.

So the first Sensible Soccer, as it arrived, probably shocked players on how difficult it was to control the players and keep the ball. It really became a game withing the game, mastering the controls, the sheer fast pace and learning all the tricks you could do. Once you mastered the controls, this game was addictive… unless you destroyed your computer first in outbursts of rage trying to master it.

Licensed teams from all Europe, custom teams with humorous names, customizable leagues and tournaments, and also licensed tournaments ensured plenty of content to keep you entertained for hours.

A much more remembered sequel called Sensible World of Soccer came a couple of years later, with a career mode and an incredible database at the time it was released. Think Championship Manager type database in that game… Sensible World of Soccer most commonly known as SWOS, improved on pretty much everything the prequel had done, so I really don't see many people coming back to play the original.

All in all Sensible Soccer, Sensi, whatever you called it, will always be a landmark and a nostalgic one for everyone that played it, I'm sure!

I remember when i was a young lad and watched DOS games running on an IBM PC clone. Gone were the days where i waited 5 minutes to load a game on my Timex 2048 ZX Spectrum clone. So me and my brother frequently visited our neighbour to play some DOS games on his IBM clone.