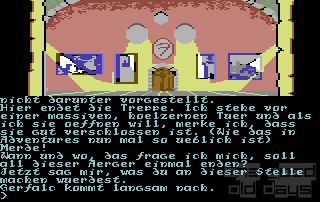 Who or what the fuck is “Hellowoon”? This is exactly what the protagonist also asks himself at the beginning of the game. He got hit on the head badly and is now imprisoned in a dark, moist cell. Putting the strange word aside, this defines the immediate goal: getting out! But how?

Then again, the answer to the “mystery” is fairly simple: Hellowoon is the title of the game in which the protagonist is trapped. Guido Henkel, its designer, is much better known for the Realms of Arkania series these days, though he got his start in illustrated text adventures.

His debut isn't so much noticeable concerning its theme (cliché fantasy material) or its gameplay (puzzles around opening doors interspersed with fights made more cumbersome and tedious than necessary by the parser interface), but rather it is remembered due to the parser responses' tone. A witty tone, in spite of serious theme, was absolutely common at the time. Though such a strong “character” in the parser voice is special indeed.

Using a first person narrative voice, there is a sort of dialogue between the player and the protagonist. The protagonist is more than just the player's avatar, but a (more or less) independent actor. The theory behind all of this is sound.

In practice, it looks like the player/protagonist duo is supposed to be the new Odd Couple, or another similar screwball duo. The protagonist takes the Matthau role: where the player is trying to solve the presented issues in a structured manner, the protagonist keeps complaining and demonstrates his laziness by refusing actions (only carrying them out later on repeated insistence), mocks failed or seemingly “useless” commands (EXAMINE TABLE) etc.

Although this can be entertaining provided in the right dose, it does get annoying when it becomes too prominent. Particularly, it happens if the neverending “complaints” of the protagonist subjectively appear completely schematically and do not fit the actual situation: who is it that needs saving from imprisonment? Whose life is in danger? Right, not the player's. She is only a voluntary supporter in this setup. Upsetting the only sympathetic person around may not be the smartest thing to do in such a situation… 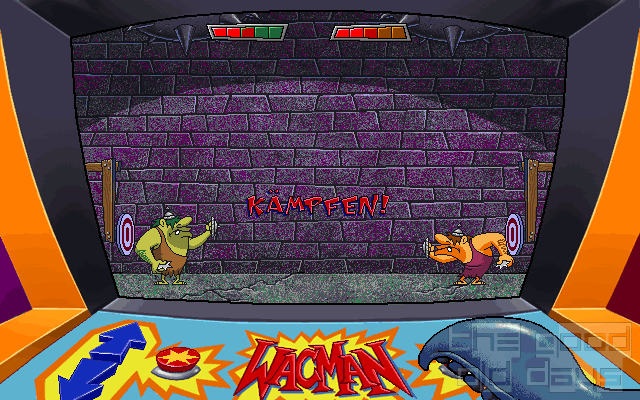