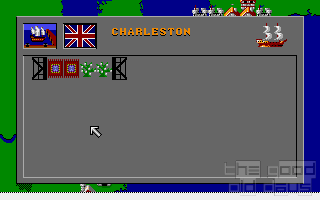 The story of one of the unsung heroes of computer game design begins here: David Lester. His company, Impressions, made a name for itself in the mid-90s with some popular strategy games (mainly the Lords of the Realm and Caesar series). Though when that happened, most people who had followed their history up until that point were actually surprised, as in previous years, reception of their releases had been almost universally negative, so that it was actually surprising that they survived financially. Yes, better keep your expectations down for Merchant Colony.

Set in the 18th century, with imperialism in full swing, it is the player's goal to build up a colonial trade empire. Who would have thought? From the European home base (choice of country absurdly also determines the game's display language), ships are equipped and sent to all parts of the world. Colonies cannot be freely established anywhere, but only in pre-defined landing places. Settlers, workers, engineers etc. take care of the heavy lifting and soon, exotic raw materials may be produced… which then may be simply transported to one of the already established ports for sale or further processed into more valuable goods. 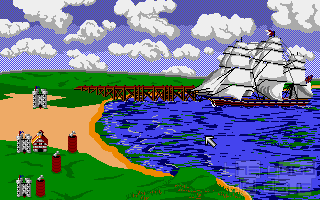 At some point, disgruntled natives inexplicably incontent with the occupation and exploitation of their home lands, usually countered with a military expedition force. And while the soldiers are there, why not send them to stir up a bit of trouble for the other colonial powers? Whoops, pirates are disturbing our trade routes? Let's send them to the depth of the ocean!

In a number of ways, Merchant Colony is a remarkable game, especially considering it is someone's first. Not only is the scope and theme sprawling, showing the ambition to build something large, but graphical presentation and interface have been clearly designed to appeal to a broader audience than the die-hard strategy crowd of the 1980s.

The game takes place on a graphical map which is not just for show, but small ships are moving across it in real time. Settler, soldier etc. figures as well. All buildings can be seen right there as well. Any commands are issued directly on this same map as well, simply by clicking on the relevant part of the graphics. Clearly, the game interface attempts to avoid indirection and abstraction as far as possible.

As far as gameplay contents are concerned, the military aspect, although present, clearly puts the focus on defense rather than going in guns blazing, trying to conquer one's neighbours immediately, which is a nice turn. Not only is the underlying economical model of harvesting, producing and trading sound and easily understandable, it even allows for quite some freedom of player approach. Those who feel so inclined could, for instance, even skip the whole colonization aspect and simply play the game as a basic trading simulation. Selected statistics help planning immensely. The balance sheets for expenses and income are clear, and comfort functions like the world prices overview save a lot of clicks and note-taking.

Unfortunately, the devil is in the details, and finally, Merchant Colony fails at its own ambition. Micromanagement being the main reason. The game seriously expects its player to control every single ship, every single figure individually and often in detailed, tiny steps. Pathfinding will fail at the most trivial obstacles – maneuvering a ship into the Baltic Sea is so tedious that you'll likely avoid trying to reach any port there soon. Plotting longer routes, however, is only possible with at most two waypoints. It is not even possible to simply tell a ship to sail to a specific port. No, it has to be sent to the empty square next to the port, then select the anchor icon to enter. Almost needless to say that standard trading or transport routes (“Pick up rugs from our American colony and sell in Liverpool, pick up iron ore in Amsterdam and sell in New York”) cannot be defined and automated. 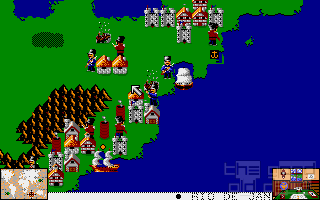 For land-based units, it is similar. They will happily and blindly run into swamps to die. Standard, high-level commands such as expanding towards a certain compass direction, aren't possible. Each figure needs to be sent to its exact spot and then an explicit command to build given.

The big question is: how is a player supposed to manage all of this? It still works somehow (though even then not exactly comfortably) for one or two colonies and a handful of ships maximum. Anything beyond, simply turn unmanageable as too many things happen at the same time. The relation of investing effort into taking interesting, relevant decisions versus just fighting with the mechanics is way off.

Merchant Colony falls into the same trap as Rorke's Drift (published by Impressions, but not designed by David Lester): too much unavoidable micromanagement, made tedious by interface imperfections and limitations. The big difference with said game being that the fundamental design is nevertheless a good one – interesting theme, good scoping decisions, balanced selection of gameplay elements. This is where Lester already showed his talent, even if his debut is not really worth playing. 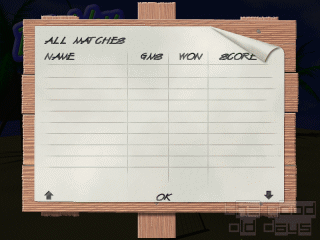