Catch the Kreis
for PC (DOS) 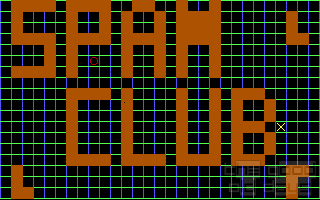 Catch the Kreis is a simple, yet fascinating arcade game. It resembles the huge coin-ups of the 70's and that where it draws its fascination from. You're an 'X' (controlled by the cursor keys) hunting a '0' on a board divided into squares. Very hectical - be sure to pump up enough adrenaline! But let's hear what the author has to say about the developement of the different versions (comments from Dregenrocks are in italics):

9th-10th March:
Through the still missing internet connection in his new flat, our hero decides to do some programming for fun. The wildest ideas came to his mind, what he could do for things. He dreamt of a rpg-game. But, what do you need first? Right! You need a gaming-field, where the figur is able to move on. After a short amount of time a net with a test-figure, a simple cross, is cast on the screen. The main part of Catch the Kreis! Although this wasn't planned this way our here wanted to have some fun and placed an 'O' on the screen, which was moved randomly and had to be 'catched' by the X. Our friend recognized fast, that this was much fun. He decided to make a stand-alone game out of this for his homepage. Just for fun, of course...
The result was version 0.3. It was really just an empty bunch of squares on which an '0' was jumping around. Once the player caught the 'Kreis' (German for 'circle'), you got back to DOS. Nothing else in it. Quick start, abrubt ending!

11th-12th March:
A long night laid before our reckless rocker. He wanted to do two little Intros, that should become better, than he has imagined. At least the first Intro, the Dregen Rocks-logo, was more a random-event, than a planned masterpiece. First he just wanted to let the font scroll down, but he messed up a well-know algorythm of him and so the stunning effect was born.
This was the typical developement: Including flashy effects was preferred over improving the real game! Sure, especially the first intro (see screenshots) looked cool. But who watched it more than once? The player was still stuck with the same old game, only with a highly increased version number. At least it was now visible for everyone how the game was called

13.-15. March:
Slowly the things turned up. Through the first positive response he prepared to make a real game out of this. A time-counter, highscores, blockades and 3 'real' levels were added. The difficulty-levels were optimized, too. The only thing, that was still really missing, was an A.I., because the 'O' was still directed through a random-routine. But the responses were surprisingly good and - more surprisingly - there were a lot of response...
And how did he get this feedback? He took the name Spam Club literally

The new levels added a lot to replayability and excitement. The graphics were also improved: not as flickering anymore! This version also includes the source code.

16.-24. March:
So, now the poor protagonist sat there and thought night after night, how he would be able to do a real A.I.. And only after a few frustrating attempts he had done that, what he had ever dreamt of. An intelligent-seeming- computer-opponent. A few new levels were added and the Version 1.2 was done and added to his homepage. The same evenig the first reaction of the 'Krude' arrived, were two 'bugs' were mentioned. An hour later these two were patched and here we are...
Yes, he had promised an AI. And it was there with this version. But this AI makes the game even easier! The Kreis just tries to get away from the player, and as they start in opposing corners anyway, the Kreis remains there - it can never get away farther than that! So if you approach the Kreis diagonally, it'll just wait for you. Some of the new levels also proved impractical because of too many borders. But in spite of that all, this is the best version so far.

25th-30th March:
There was a primary task: The complete reorganization of the Highscore. Step 1, to unify all data into ONE file, was easy to do. Step 2 indeed, to create a new and fair scoring-system, that includes the level of speed into its calculation, was real difficult. After all I decided to take the most easy and understandable choice: time*slowlyness.
The next ones on the list were the level-additions. The two first ones, were the teleporter and the time-trap. This forced me to change the speed of the game again, because through the grows of the event-code, the game started to become slower.
All the time I tried to reconstruct the code, so that it is easier to overlook. Nearly I forgot to tell, that I added the 'Announcement-Screen', sometimes with a dedication. The last to days I used to optimize the additions, for example the teleporters now work in order and not randomly. There were a lot of little things to do harming the code, but that are not seen directly in the game. Finally I added three more 'test-levels', so that the additions could be evaluated.
Even though it may have consumed the most time, the highscores aren't the most 'visible' improvement. Especially since this systems means that less points are better! A simple calculation would be enough to make it percentages for example...
The new level features are much more interesting! And their well done. The teleporters combined with the fact that the Kreis now even MOVES, makes the game a real challenge at last! One new level had invisible walls with the last page still 'shining through'. A bug?

31th March-1st April:
Thousand little things to do. The preference screen didn't worked correctly. If the game was interrupted with 'ESC' while playing, there was a bug that bumped the screen. The whole event-code was not in the best order, so I sorted it for the best functionality. The teleporters were a main problem, but now I managed to create a little algorythm, that makes them a reliable part in the game. But for this and many little steps forward I had to put the main-routine upside down. Hope it was all correct. Two levels added, too.
Yes, it was indeed a bug. And now it's fixed. This version also adds two new nice levels!

until 16th August:
Holiday, Work, Holiday, Work, Holiday, Work... and no Catch the Kreis... There were only a few times when I had time to work on the game. When I were up to do something, I first wanted to start the whole thing from the beginning once more, so I could implent a lot of new things a lot easier. But after some thought I came to the conclusion that this would take too much time and I would finish my work on CtK, if I would finish it ever, in some years or so. After all I took the last Version and began to do some of those things I wanted to do all the time...
First I divided the levels from the main code and “Voil&aacute;” (?) the compiler stopped to cry. And as a side-effect the creation and implementation had become a LOT easier. Beside this I “corrected” a few of my own levels and included two from Johann67. After

I killed two of mine there were still 15, but more important things had to be done first.
The bugs from 1.41 were a primary task. Now one teleporter brings the X and the O BOTH to the SAME position. The Kreis which was “walking through walls” is history, too.
Apropo Kreis: The secondary (but more important) task was the AI. I killed the annoying “slowlyness level” and introduced three levels of AI (two are already done in this version). Now the Kreis moves sometimes a bit more strange, but it should give you much more fun. After all it has not become much easier.
Comprehension: At least I've decided to release a new version after some time. Much changement may not be seen, but the Beginning is done... (?)
The most visible change is that Dregenrocks got rid off the eye-destroying grid. The fields now look tidier, easier to the eyes. Playing for longer could be possible now. More importantly, the improvements of the AI indeed works! On AI level 2, the Kreis is already pretty smart, very refreshing! One of the major downpoints of the previous versions is solved.

until (and mainly in the night of the) 10th September:

A lot of work done, but not a lot of real improvements in the game itself. Okay, some after all. For example the trap now works in real-time. A new map-tile is introduced, too. The “Alcoholic-Field” which inverts the directions. If you still don't understand what this should mean, you'll notice it in game itself...
But the main improvements have to do with the graphics and some internal coding. About the graphics I don't have much to talk about. You'll see the changes. The important things is that I get slowly but steady closer to the “speed-border”. I'm nearly forced to run the game as fast as possible due to the growing event-code. Some of the graphics were already “flickering” (?), so I had to trick around a bit...
Comprehension: A lot of things done, but nothing to talk really about (weird...). After all a big step and at least some new levels...
The graphics don't look as flat anymore, there's a frame which prevents the levels from 'flowing out' to the sides. Great! The new trap's also working, reminds me of a lot of classic arcade games

But those bugs... The Kreis and Kreuz both keep disappearing when teleporting or standing on another special field. Oh well...

until the 15th September:
A lot of bugs were revealed and crushed. Now the game should be a lot more playable
As he said. Now it's at last possible to enjoy the new levels properly!

until the 26th September:
The last two bugs are now history. The telporters were optimized again (You'll see it!) and the unplayable level 14 from 1.71 was fixed, too.
Not really a landmark, but well... what can we expect from such a small increase of the version number? It all seems to be working, difficulty level 3 is almost unbeatable in some levels! Happy gaming! Your doctor awaits you concerning the treatment of your hands' joints

The development of Catch the Kreis has come to its temporary ending. Why? I reached the (normal) borders of Quick Basic and I reached most of my goals. I learned a lot during the work on CtK, but now it would become ridiculous to improve the last version with Basic. The Source-Code has become bigger and more complex than I would have ever dreamed of. Due to the fact that I took this game as a “study”-project for my first “completely” finished project which got even “sense”, I was temporary overwhelmed by the experience of getting reaction by person I never meet and by persons I even didn't knew. Independent response for a product of mine! I also learned how to “create” bugs... Now this was a feeling!
What will come? I started a full scale study on C++ (at last). Before now I only used this language when it was unavoidable. But it's time for something new. Maybe a new Catch the Kreis, maybe something different... But I can't guarantee if there will be a new CtK. And when, maybe in three month, maybe in a year. Maybe in five years. Who knows...
Ultimately I want to thank all the ones who - in any kind - participated in this project and supported me. And of course I want to thank all those who had fun with the game... THANKS A LOT!!!

(New levels are still accepted!)
For anything related to the game, contact Dregenrocks.

Mr Creosote:
Feel free to share anything about Catch the Kreis (2001) here!
[Reply] 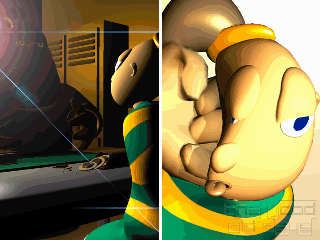