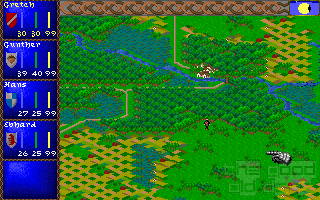 Darklands is partially an historic game, but also partially a fantasy game based on the medieval myths of the christianism, of witches and of goblins. With your party of four adventurers you go around the 15th century german empire in search of fame. You will travel around the country, being asked for tasks or asking for them in cities, scouting pilgrims, freeing villages from the pillages of raubritters (robber knights), getting rid of paganic dangers and goblins or even, if you want bigger tasks, looking for the places the sabbats are celebrated and giving an end to them.

It is an open ended game, so you don't have really an aim except gaining fame. Even thought there is one long quest, you don't have to do it nor the game will end if you finish it. Also, it has an original and good game system.

First, the more similar thing to magic you will have are the alchemy and the saints. The alchemy allows you to make potions, if you have the required knowledge and reagents, that are useful in a range of situations, and not only combat. You can dissolve locks, or simply blow the door, or you can hide yourself or distract others with the gaseous ones. The saints give their help more cheaply than the alchemy, but they have limitations. Once you learn about them, and if you are virtous enough and have some divine favor points to spend, you can ask for their help, which is mainly useful in special situations. But your prays not always reach the heavens.

And second, the character development isn't based in levels, it is based in skills, in a little repertoire that goes from being more able to travel and escape through streets to reading and writing or religious knowledge, all of them with a numerical score that raises as you use them and/or receive training.

In general, it is a good game that makes you feel in medieval germany, where you have a country to explore and travel in search of fame, open ended and with diversity enough to last a good time.

A beautiful game that has always been one of my favorites. The historical setting with mythological implications taken seriously is something that is sorely lacking in both games and fiction. Who needs elves and orcs when we have a wealth of medieval and ancient legend to draw from? Imagine a 15th century Germany where every provincial old wife's tale and myth is real. You got this game's setting! You can fight dragons, break into witches black masses, pray to certain saints so that you can walk over water or heal mortal wounds, learn the alchemical secrets of the philosopher's stone, and more.

The game is a must for historical buffs for that reason alone, but there is much more: It is actually a great game with brilliant sandbox rpg design that will grip you for hours. The depth of design and actual roleplay available in this game is frankly amazing and Modern sandbox rpg games such as The Elder Scrolls come out incredibly shorthanded in comparison. Character creation is extremely complex and every stat will eventually influence events and decisions in the game. There is even an aging system where characters get penalties after certain amount of game years. There is a main quest (involving gross satanical rituals and the knights templar), but as mentioned the game is completely sandbox and doesn't really end. The game does it all successfully and I see no reason not to play it for hours on end.

Funnily enough, even though the subject matter is largely fantastical the historical depiction of 15th century Germany is very accurate and well researched (sans the demons, witches and dragons off course). You can tell right away that a lot of love was put in this game, and its lead designer Arnold Hendricks is actually a historian and used his knowledge richly.

Sadly, it seems the game was not commercially successful and even more sadly the great ideas presented in it have never been picked up again. The manual ambitiously mentions future games or expansions set in other European countries during the same time period. Imagine how great that would have been! Oh well.