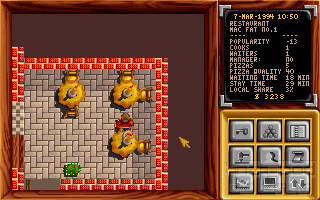 Pizza Tycoon is not only the original tycoon game that started a whole niche, but also one of the best ones. It had all: a relatively simple concept, a mix of several gaming styles, money and property management and cartoonish graphics. Add to it tacky music, several amusing sub-games and several ways to make money, and you have something that should be hardly bearable to a hardcore gamer. However, include a very deep business strategy, mix it all together, and suddenly you have a very decent game that everybody would like.

In this game, you assume the role of the owner of a small pizza place. Your task is to eliminate the competition and spread across the globe. Actually, your goal is whatever you wish it to be; once you enter the gaming world, it is up to you what you want to do. As the name suggests, however, your first task will most likely be to build a working pizza restaurant.

At the beginning, you will take care of everything. You will have to select a location for your pizzeria. There are several cities to choose from, with several districts, each of which has its own demographic profile and tastes, which you have to take into account. You will have to find an empty store and either rent or buy it. Then it's up to shopping: you have to equip the kitchen and furnish the dining room. At any point, you will be able to check how much people like the furnishing; the higher the rating, the more customers will show up. After hiring the staff - a cook, waiter and possibly a manager (all of which have their own set of statistics), you are up for the fun part: creating your pizzas. There are several recipes in the manual, all of which should be reproduced for the basic menu. In the pizza creation menu, you will be presented with an empty pizza cake, and every possible topping. You can chop it, arrange on the pizza and serve. If you get good at it, you will be able to enter competitions in pizza creation, held on a monthly basis. After you are done with the menu, you shop for all the raw materials and it's time to open your shop.

Within a few days in operation, however, something happens. A few thugs will come in and tell you that it's beneficial for your health to pay them protection money. You already are in deep debt due to all the loan sharks out there, and your restaurant is not yet profitable, so paying protection money may be more painful than getting trashed. You realize, however, that there is a whole another set of business relations taking place in the underworld, and decide to join. You contact the mafia yourself, and offer your services. You start out with transporting items, then move on to trading in arms and more. As long as you are careful and don't get caught, this line of business is very profitable. In addition, for each successful job you rise in the ranks of the mafia, and soon become important enough to have the thugs pay to you instead of you paying them. You will be able to bomb competing establishments to eliminate competition, and before you know, you are not only the mafia boss, but also the pizza king.

This is in short the story of Pizza Tycoon. As good as the gameplay sounds, it is also highly unbalanced. I have been playing the game for years now, but never succeeded in becoming profitable by legal means. This means that those gamers who prefer to play only the legal way will be at a disadvantage. To make matters worse, the illegal way is not too easy, either. It is highly profitable, but a single arrest, especially early into the game, will cost you dearly, probably too much to continue playing. The main problem here is that whether you get caught or not is determined by the time you accept a mafia job, and you will have no way of knowing it. As such, you will end up saving and loading games all the time, only to prevent getting arrested. Pizza Tycoon 2 has solved this problem by a small arcade sequence where you have to avoid police cars to get to your place of delivery, giving you the chance to be the master of your own destiny. This is not possible in this game, though.

As for the technology in the game, it could hardly be any better. The graphics are a little too cute for my taste, but very detailed, and colorful enough for the player to always have an easy time locating what he wants. Several zoom levels in the town overview, as well as several filters resembling those in SimCity also help. The only part I don't like about the graphics is the attempt at humor. The designers apparently thought it funny to attach some strange faces to some of the characters. There is Margaret Thatcher, Ronald Reagan and a few more, either in the role of loan sharks or the policemen. I could live without them. The music is a little tacky, but never in the way enough to be obnoxious. The interface is mouse-based, and even though the time flows in the game as you play, the interface is very easy and fast to use.

Overall, Pizza Tycoon is a fine piece of work. At the time it was released, the game offered something new and unique. The gameplay, while unbalanced was great fun, and the graphics and sound improved the game even further. Pizza Tycoon deserves its place in the gaming hall of fame not only for the fun it provided, but also for the fact that this simple game kick started one of the hottest niches of these days - the tycoon genre.

The manual provided contains recipes and phone numbers needed to play the game in German. Check the links for an English version. 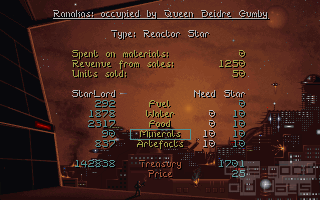