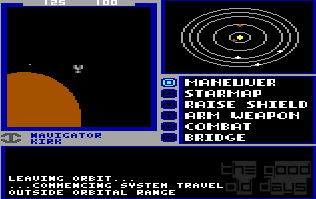 Only a few centuries ago, the humans have discovered space travel. They build a space station orbiting their home planet, Arth, and send out ships to scout the known universe for habitable planets. No, it wasn't a typo; the humans are convinced that their home planet is called Arth. What they don't know is that due to the rogue Crystal Planet, which has the capability to destroy a whole solar system, all races in the galaxy are in a permanent state of exodus, and during one such exodus the Earth and most of its colonies were destroyed, plunging the backward world of Arth into a dark age. Times change, and Arth is now as advanced as the Earth ever was, if not even more so. However, recently the star your planet is orbiting has destabilized, and ships that were sent out to find another habitable planet disappeared. You are a freshly commissioned captain of a small ship, with only one goal in mind: making money. Since your world needs you, though, you agree to do some exploration on the side as well. You'll soon run into questions you don't have answers for. Who are the Ancients? What is the Crystal Planet and how to stop it? Why did other races flee and why are some of them trying to wipe the humans out? All those and more questions are just the beginning of a story that offers up to 100 hours of gameplay that spans over 800 planets.

Starflight is a fractal game, on more levels than just one. The most obvious level is the universe. Thanks to a fractal formula, the designers were able to cram 270 solar systems with 800 planets on two 320kB floppies, with space to spare for the graphics and the enormous library of text files with a detailed background story. When you land on a planet, another level of fractals emerges, as each planet is randomly generated, using a combination of a fractal generator for the surfaces and an ecosystem generator for the environments. As you play the game, however, the third and most important level emerges: the whole gameplay is one large fractal. Every time you think you understand the mechanics of the game, a more advanced and subtle level emerges, and you realize that you have barely scratched the surface of the game.

You start the game with a primitive spaceship and a small amount of money, which you'll spend quite fast as you hire a crew. The crew, as well as the spaceship, resembles the Star Trek series a little. You'll have a communications officer, a physician, a scientific officer, an engineer and a navigator. Each has their own function and certain degree of expertise, but in the worst-case scenario, they can all take up the role of another officer. When you have your crew together, you can go on exploring the planets in your solar system and eventually those in other solar systems.

One of the strengths of the game lies in the degree of realism. You need to complete several tasks, such as scanning a planet for a good landing place, prepare for landing, etc., which makes it feel like you are really commanding a spaceship. The landing itself, when you see a 3D surface of the planet through the window, was one of the most impressive sights of its time. Once you are down, you'll need to take care of your money situation first. Starport will pay a ransom for certain minerals, even more for life forms and a whole lot of money for information about habitable planets. You'll need the money, in order to improve your spaceship, train your crew and refuel on the expensive Endurium that powers your ship and weapons. Even though your first impulse would be to increase the cargo space, you might want to think about arming your ship and adding some defenses. You'll soon find out that you are not alone in the universe.

When you encounter other alien races you'll realize how complex this game really is. The level of diplomacy is considerable, but it can't compare with the depth of background information and personal touches of each race. Every alien has its quirks and a very unique personality. Each of them will approach you with an already formed attitude, but depending on your communication skills, you'll be able to change this attitude over time, for better or worse. In no other game have I felt that the enemies were so real, almost human-like. I grew to hate a few of the races, and always plotted their destruction. Some of the aliens return the favor: they'll hate you, too, and attack you on the spot. This was the only thing I didn't like about the game: the space combat is presented in a top-down view resembling Asteroids, in real time. While some people will tell you that the combat is incredibly easy and boring, I'm not much into action gaming, and I found myself dying frustratingly often.

As the game goes on, you find yourself well armed, with an expert crew and with enough money to last you for a while. Now is a time to take care of your poor people. They are afraid that their sun will soon blow up, and need another planet to settle on. As your first task, you'll need to find such planet. By that time, however, through various information from other races, as well as through artifact discoveries, you begin to suspect a much more sinister plot. Apparently, an outside force is responsible for the sun's instability, and the mysterious Crystal Planet seems to be behind it. The million-dollar question is why, and how to stop it.

Starflight is an incredibly complex game but with such a slow learning curve that you'll have no problems keeping up. The plot, while rather linear, will not limit you in any way (other than the fact that the time is running out for your home planet, albeit very slowly), helps to keep the learning curve low. You'll be able to progress on your own, and while concentrating on the main plot (and on building up your strength) yields up to 100 hours of gameplay, following different sub-stories can increase the total gameplay considerably. In this sense, Starflight is technologically more advanced as the poster boy of current games: Morrowind. Where Morrowind runs smoothly on a Pentium 3 computer with 256MB of RAM and takes over 1GB space, Starflight achieves the same on an 8088 with 256kB of RAM and 720kB of space. What's even more impressive, Starflight pushes the technological envelope more than any other game I can think of. Instead of demanding more computing power, the developers tried to work with what they had and came with the most incredible graphics ever created for a 4-color, 200x160 display.

All in all, Starflight is one of the best games ever created. It pushed the envelope in gameplay, technology and story depth. Adjusted for technological inflation, Starflight has been unsurpassed until this day in the latter two categories, and only very few games ever managed to match it in gameplay. It belongs to every gamer's collection, and it remains one of the best reasons why you should keep your old DOS computer around.

This game is a masterpiece.

The legacy of this game lives on and on. Games like Star Control or more recently Mass Effect were inspired by the awesomeness that is Starflight.

This game looks at its best with EGA/Tandy graphics, the EGA version was released a year later and it was somewhat easier, as it had a few more planets that were colonizable among other small quirks.

I don't want to dive into the story as this game is a rough diamond that needs to be played on, studied and appreciated for what it is. Starflight will reward the player. You have to be witty, daring but also careful, compassionate but also indifferent as communication with other races is essential to go through the plot and to finish the objective of the game.

With 800 planets and 200+ solar systems to visit you have enough entertainment to get you covered for hours and hours of playing. The greatest drawback that will annoy you about this game is how save games work. Because of the way it was designed, the game updates its progress on the main executables. This is a problem because if you exit the game without saving the executable files will have been changed properly, which will basically make the game unplayable next time you try it. Users were recommended to NEVER play the game on the original disks, but instead use blank floppies to copy the game to and play from there. The version on GOG includes a smart batch file that does all the work for you. There is no on-disk copy protection, so feel free to make disk copies all you want, but there's a code wheel which you need to use everytime you exit the starport. Gets to you after you use it a few times. But the goods of this game surpass by FAR its drawbacks.

You will only understand the scope of this game when you start to play it. So what are you waiting for? Go now!

carlostex:
Quote:
This game is a masterpiece.

Jackro:
This was a great game, until genesis came out with it, and dwarfed it, with easier controls and deeper digging, instead of one dig, you get up to 7. If you liked this one, then go find and old genesis(or the emulator) and get it there.
[Reply] 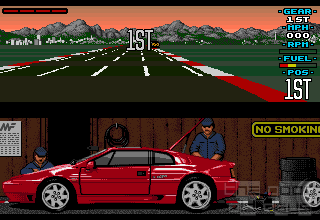