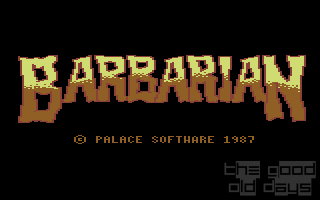 To get the story over with: Evil wizard has captured the princess, oily muscleman carrying a huge sword tries to free her by first confronting the sorcerer's soldiers and then the evil master himself.

Barbarian can be played in two modes. First, there are training fights with blokes you happen to run across in the wilderness. This part can also be played by two human players. The actual campaign for the princess is limited to one player versus the evil computer, though.

For whatever reason, you only ever have to struggle with one opponent at a time. Using various moves (triggered by joystick with mediocre responsiveness), you try to bring the enemies energy bar down to zero before your own one reaches the bottom.

Nothing really special, Barbarian got famous and popular for other reasons than originality or sizzling playability. Its main attraction with kids back then was the brutality it shows. On top of the 'coolness' scale: the move which makes your character chop the opponent's head off (complete with a goblin coming in to drag the body away, kicking the severed head aside).

Also, since the fights all take place either in front of the wizard's throne or in his arena, he's always there himself. But not alone - the scantily clad princess is always there, too. This lead to demands from players for her to appear naked. One cracked version (which we're offering for the sake of hypocrisy) delivers that as well.

So, while Barbarian might not be especially appealing for its gameplay, it's the forefather of a huge trend which would develop only many years later. These days you'll have a hard time finding a game for which there isn't a 'nude' patch, and lots of gore is always included by default anyway. Way ahead of its time (whether you interpret this in a positive or negative way is up to you), even if it looks quite tame by today's standards, of course.

Herr M.:
Oh boy, where the ads like the box cover? They are most certainly… memorable.

Moebius:
Quote:
The trivia about the joystick is also quite interesting.

LostInSpace:
What I really like about this game is it's advertisement in computer magazines at that time

Moebius:
It was one of the best games on Spectrum, and it actually looked a bit better than C64 version. Although, lacking in colour but compensating with better detail, which, i believe, is of higher priority here. The gameplay is pretty good, all the moves are quite diverse, the graphics and animation are on top (for those times). BUT.. there's just one little disadvantage: absolutely no variety of opponents, but just one and the same, which if defeated becomes tougher, and this neverending battle never ceases, but just goes on and on. I think that's a great flaw and in a sense leaves the game incomplete or even makes a demo version out of it. However, it's still a masterpiece, and since the people back then weren't as spoiled as we are today, they considered it to be perfect.
Mr Creosote:
Feel free to share anything about Barbarian: The Ultimate Warrior (1987) here!
[Reply] 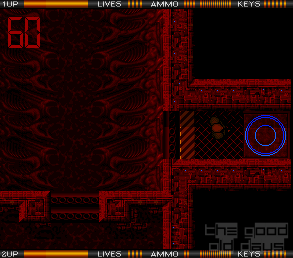