I'm a former 90-2000s gamer and presently an old school enthusiast from Eastern Bloc. Like most people from my generation I was introduced to computer world beginning with 8-bit family machines.

My first friend was Vector-06C which imparted to me some basic knowledge of IT and some programming skills.

My next baby was Sintez-2, which is a Spectrum 48K+ clone and it occupies a special place in my heart to the very present day. My favorite Spectrum games are pretty much the ones I review.

In-betweens I would occasionally indulge in gaming consoles like NES and SEGA Mega Drive / Genesis, but it was mostly to compensate the temporary lack of computers in my life, since I'm more of a PC kinda guy. Which is to say, I'm neither in mad love with gaming consoles nor do I receive a lot of good memories from that time period.

My third companion was ES-1841, which happens to be an IBM PC XT compatible finally opening the gates to MS-DOS environment along with the blue panels of Norton Commander where I would spend plenty of good time playing old CGA-allowing games and further advancing my programming skills in apps like GW-BASIC. That was a very warm connection and it's also when I got acquainted with some classic adventure titles like Police Quest, Hero's Quest and Loom.

Later I would familiarize myself in almost successive order with standard IBM PC compatibles starting with 286 AT all until Pentium family and ultimately present day hardware. Like many I never owned a brand computer and would set up my own manually which would often initiate from a single montherboard, where a monitor was typically the hardest to obtain. My favorite games of that period were mostly adventures and particularly King's Quest, Quest for Glory and Leisure Suit Larry series.

I'm not much of a gamer today, but I do keep fond memories of every computer platform I've ever been in contact with. I collect old games and enjoy writing reviews on them here on TGOD. I specialize in ZX Spectrum titles by default, but I also don't mind reviewing PC ones, which may sometimes even compel me to play some of them. 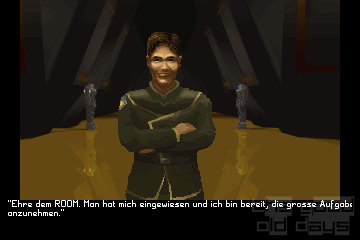