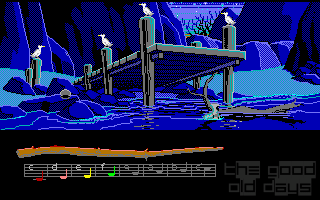 1990 was the year of Monkey Island. So great, so successful that it overshadowed everything else - including this earlier product of the same company. Not to say this is an 'underground' game or a 'rarity' - quite the opposite. It was a best-seller and even today, it is one of the most widely known Adventure games. Just not as much as Monkey Island. And not as one-sided positively as Monkey Island...

After some successes, it is always easy to ride on that wave and continue producing similar games. After Maniac Mansion, Zak Mc Kracken and Indiana Jones 3, Monkey Island was the 'logical' follow-up. Loom wasn't. Even though it does belong to the same genre, it is not exactly what anyone would call 'conventional'.

Normal Adventures have an inventory to store items the player picks up. Loom doesn't, because the player simply doesn't pick anything up. Instead, you only directly interact with the surroundings. By the usage of verbs, but again, not like in other Adventures. The main objective is to find out how to use the verbs! This is related to the story - what a convenient coincidence for the writer of this review...

It is Bobbin Threadbare's 17th birthday. The elders of his guild, the weavers, have sent a messenger spirit to call him to the 'city hall'. Arriving there, young Bobbin observes the trial of Hetchel, the woman who adopted him. Weird accusations (concerning himself) are raised against her and finally, the elders come to a verdict: Hetchel will be turned into a swan and banned from the weaver's island. The spell is woven into the great loom, but something goes wrong. In the middle of the ceremony, all the elders are being turned into swans themselves and fly away. Bobbin is now alone on the island.

The head of the elders has dropped his staff, and Bobbin picks it up. He has seen it being used to weave spells before, but he has never tried it himself. Thus, his ability is very limited. But he knows the basics, because Hetchel had shown him a book about this topic a few times.

The magic of the weavers is based on music. Four notes make a spell, the correct order is important. And so the circle back to the puzzles has been drawn quite conveniently: Bobbin doesn't know any spells, he has to learn them. You can do this by observing your surroundings. A flask out of which liquid is pouring makes certain sounds. Might this be a spell? Exactly that is the idea. All you have to do is find a suitable object which you could 'empty' magically and play the necessary notes to see if it works.

This way, the player 'learns' more and more 'verbs'. These spells are unique each time you play the game, i.e. no walkthrough can say “the spell for 'light' is EFFE”, even if it might have been for the one who wrote it - next time, it might be a completely different combination of notes.

Loom is aimed at beginners to the Adventure genre as well as younger players. Beginners, because it is quite easy, the puzzles are mostly obvious and logical, and it is also quite short and linear - it can easily be completed within two or three hours.

Younger players because it is basically only a fairy tale. A tale of a magical land inhabitated by 'humanlike' people who live in different communities (called guilds) which all have their own philosophies and views on the world. These guilds all refer to certain jobs: weavers, smithes, clerics, magicians, shepards and so on. A very easy world in which people are easy to categorize.

I don't mean that in a negative way. Some parts of the world are quite imaginative and well thought out. For adults, the game also touches a few popular philosophical subjects and even makes some indirect, but not so subtle political comments in direct reference to our own world. If you don't want to play the game just because of its 'childishness', you're probably some teenager who has only just stopped reading the stories of the brothers Grimm one or two years ago and now considers himself too 'cool' for this kind of thing.

Loom features three different difficulty levels, depending on your musical education. The easiest displays the notes whenever you hear a spell somewhere so that you can conveniently write them down and use them very much the same way. Medium difficulty at least still gives you some visual hints, and on high difficulty, you have to rely completely on your hearing. Apart from the extra challenge, you're rewarded with a few extra cut scenes on higher difficulty - in fact, you'll miss the best ones if you're playing on wimp mode...

Now there is only the very first 'outer frame' of this review to close - the one about the 'not one-sided positively'. There isn't so much left to say about this. From the previous descriptions, it should be quite obvious why there are also many people who aren't that fond of Loom: the story scares away all 'cool' people and the nature of the controls and the puzzles scares away people who always turn their computer's speakers off and listen to some CD while playing a game. The spell randomizer scares away people who only want to follow a step-by-step solution and those who aren't willing to take a pen & paper to take some basic notes.

Altogether, that's more than 90% of all gamers these days. In 1990, it might have been 50% - just a rough estimate. On the other hand, those who like the game have a stronger than average link to it! That certainly explains the still relatively strong presence on today's Internet for example. On the official ( = Lucas Arts) side, the negative side apparantely gained the upper hand: a sequel has never been made (and no, it is not planned at the moment and probably will never be), no later game adopted the idea of implementing music into gameplay. A pity somehow, it certainly wouldn't have hurt the diversity of computer games - and that's a neutral fact, no matter what you think of it personally.

Hirschacker:
bin auch ein fan von "luckers arts"
Wandrell:
I recall playing on hard mode and seeing the secret scene. I really got surprised, caused an impression on me. But for what I heard the CD version lacks it, they improved graphics and sounds yet left out the best motivation for playing on hard.
Butterflyking: 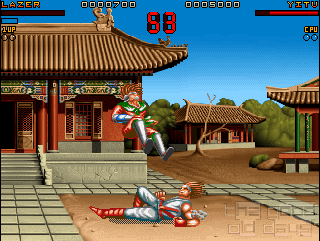