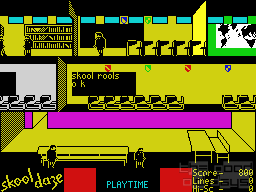 Eric is a normal schoolboy, and this game simulates his normal daily life. Unsurprisingly to those who haven't played it, but probably surprising to those who have, Skool Daze does have a goal. Eric's report card has gotten long. So long, in fact, that he's bound to get thrown out soon. Now there's only one thing to do: Eric has to get the card from the school safe located in the headmaster's office.

Of course, this isn't an easy task - and a risky one at that. Each of the school's four teachers knows one part of the safe combination, and to get them to reveal their knowledge, Eric has to make all the shields hanging on the walls all over the building to flash (probably putting the teachers in a hypnotic trance or something) and also find out the year of birth of the history teacher, Mr Creak.

To 'activate' the shields, Eric has to hit them in some way. Some of them hang low enough to reach them by jumping and stretching a little. Most are higher up the wall, though. Thankfully, our hero is equipped with a catapult. Even with that tool, not everything gets easy all of sudden, though.

On the way to this final goal, Eric has to prevent drawing too much attention to himself. If he behaves disorderly while the teachers are watching, he gets so-called 'lines' as punishment. If the amount of lines he got exceeds 10000, the game is over (Eric is suspended immediately).

Skool Daze is a very special game. As hinted at at the beginning of this review, most people probably played it without ever trying to reach or even knowing about the goal of stealing the report card. First of all, because they had probably copied the game and thus didn't know about it anyway, but also, because it still works amazingly well! The whole 'school day' is simulated very well in all its details. Break times, classes, the different rooms, recognizable teachers and even a few well-known archetype pupils like the 'bully' and the 'swot'. And between all that, you, just trying to get through the day as well as possible, getting punished for pretty much every sign of life emanating from your person (why don't the other boys ever get into trouble?).

Skool Daze is a prime example of a great game idea which has stood the test of time. It's one of the games you have to experience yourself, because it evades every description. It just won't fit into any of the distinct categories usually applied to games. It's the reason why sites like this one exist - originality in its purest state. 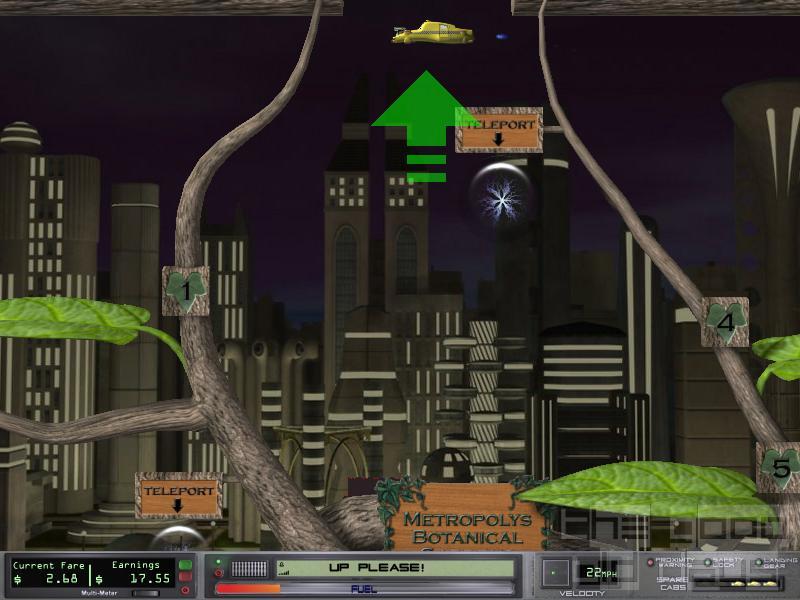