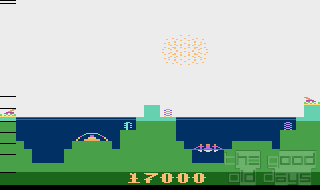 Alien Invaders, the Gorgons, are running their final assault on the city of Atlantis. The last line of defense are three guns, two positioned at the sides of the screen and one in its centre. Their lines of fire are fixed: the middle one shoots straight up, the ones on the sides fire diagonally towards the centre of the screen. The player can select which gun to shoot with by moving the controller to the left and right.

The Gorgon ships are flying over the city, and you have to shoot them. Some are even dropping bombs, and by that, they not only destroy the homes of innocent families, but also reduce your firepower if one of the guns is hit and destroyed. The only way to get the guns or the other structures back is by shooting enough ships (no matter whether they're shooting or not).

Atlantis is a good-looking and flashy Missile Command clone. In the end, it's a little frustrating that the player's whole effort is doomed to fail. No matter how good you are, the Gorgon fleet has apparantely endless supplies and the game will not end until all of Atlantis is reduced to rubble. However, even after such an apocalypse, there's still some hope: one small escape pod manages to get away...

A competition version of Atlantis was made by Imagic which was the same as Atlantis in every way except the game was much faster and the score rewards reduced, therefore making the game much more difficult. This version of the game, called Atlantis II, was used during a competition to find the worlds best Atlantis player. At the time of writing only 13 Atlantis II competition carts are known to exist and on the rare occasions that one comes up for sale these command a hefty price tag. The exact number of copies produced is not known.

Maverick1978:
One of the first Atari 2600 games that I played, it's also still a favorite!
Mr Creosote:
Feel free to share anything about Atlantis (1982) here!
[Reply]