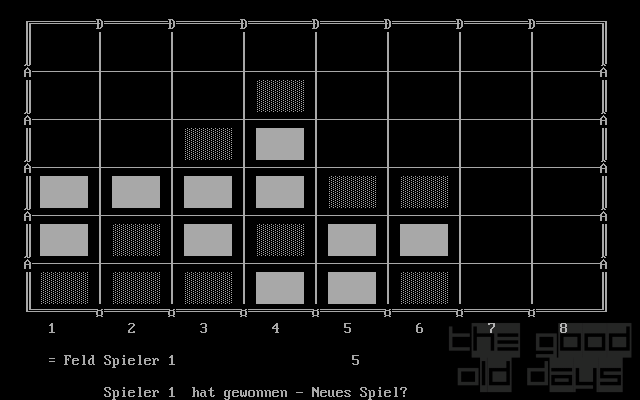 Vier Gewinnt – you probably know this one as “Connect Four” or “Four in a Row”. It's a simple game in which you and your opponent drop discs into a 7x6 grid. The first one to connect four tiles vertically, horizontally or diagonally wins. It's an easy concept, but allows for much variation.

Connect Four is a game with “perfect information”, which means that the players have all information about moves that have taken place. Chess would be another example of a game with perfect information. Having perfect information allows for calculating all possible moves and – in theory – get to one perfect strategy, if the game allows for one. You possibly know this one from tic-tac-toe, the game allows a strategy with which the first player can never lose (not necessarily win though). Tic-tac-toe is not a very complex game, you can write down all possible moves very quickly – with Connect Four it's not as easy as that. Victor Allis and James D. Allen, who solved this mathematical problem in 1988 and 1990 had some computers on the task. But in the end they came to the solution, that the first player can always win if he starts with the column in the middle. To round this up: Chess has not been solved like this… well, yet.