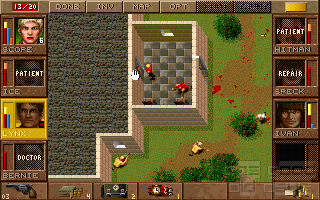 Everybody hates cash-in sequels. Just look at X-Com: Terror from the Deep - nobody likes playing that! Oh, wait, there are people who do. Sometimes, 'more of the same' seems to be a 'good enough' concept. Deadly Games is Jagged Alliance's Terror from the Deep: additional fodder for veterans with some minor cosmetic changes. 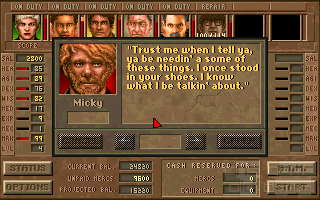 A visit from your trustworthy arms dealer

Meaning: You still get to control a group of armed mercenaries in privately sponsored para-military missions. For that, you spend each little figure's action points each round for walking/sneaking around, opening doors, firing weapons and so on. Then, the bad guys get their turn to do the same. So business as usual, as we have all known it since Rebelstar Raiders - just that Deadly Games' world is quite a lot more detailed, allows for more actions, knows more items and so on and so forth.

Compared to Jagged Alliance, one major aspect has been scrapped, though: Deadly Games only has low-level battlefield tactics. The global strategy part in which the player hired native 'sappers' and decided which sectors to attack next has no aequivalent here. Instead, some random guy just assigns random, unconnected missions to the player's team.

The blood suggest entry into this building was heavily defended

Not that anyone will miss the crap storyline of Jagged Alliance, but this is still a bit of a pity as this comes with various disadvantages. For example, the game has become very linear; also, explicit difficulty levels have now become necessary whereas the first part pretty much scaled automatically, because the player could choose how fast or slow he wanted to pursue the conquest of the island. The only saving factor of this is that not all missions have to be won - so in spite of the linearity, you will not necessarily be stuck if you cannot win a certain mission.

Talking about the missions, they tried to make them a little more varied than the simple 'kill all enemies'. Nice thought, but then, retrieving a briefcase full of documents or escorting some civilian often still amounts to the same thing. If anything, the more fixed mission structure can become a major source of frustration: Why the arbitrary turn limits, for example?

On the plus side, Deadly Games offers a networked multiplayer mode. This can be a lot of fun in cooperative mode, but it's basically unplayable against each other. Also, there is a map/level editor. That's about it for improvements, though. So, in spite of the positive overall impression and the many hours of fun which can be found in this one, a minor disappointment. But then again, they did have the decency not to call this Jagged Alliance 2...

Mr Creosote:
Quote:
Everybody hates cash-in sequels. Just look at X-Com: Terror from the Deep - nobody likes playing that! Oh, wait, there are people who do. Sometimes, 'more of the same' seems to be a 'good enough' concept. Deadly Games is Jagged Alliance's Terror from the Deep: additional fodder for veterans with some minor cosmetic changes. 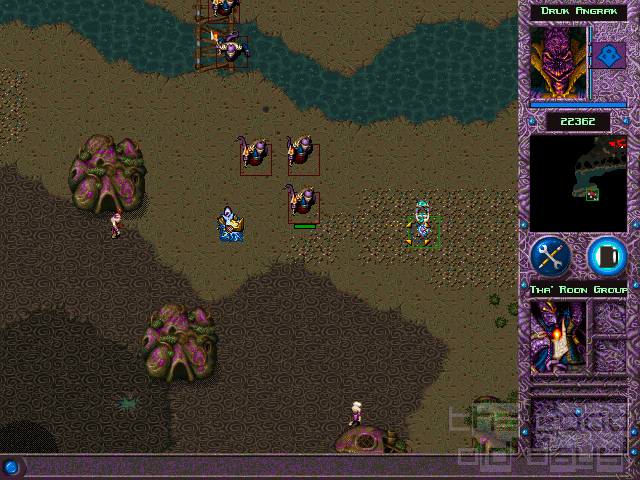