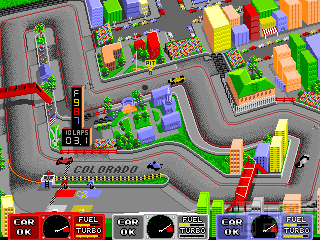 [Wandrell] Going back to the old magazines we found a game from a genre that used to be quite popular back on the arcade galleries, indy racers, I suppose we could call them, or just top-down multiplayer F1 racing.

[Mr Creosote] This genre goes back to the arcades, of course. Sprint was a very primitive one in the 70s. The 'modern' genre was pretty much defined by Super Sprint in the mid-80s.

[Wandrell] Actually, the ones I recall most are the Off-Road, or “Iron Man”, games. Probably because those were the ones popular on console, with games such as Super Offroad. From the arcades, I can only recall those big cabinets with two wheels, or even four wheels and more than a single screen.

And that wasn't just for show off. The number of players was important, as the artificial intelligence, as per usual, tends to side on the cheaty or stupid side.

[Mr Creosote] Just to step back for whom all of these titles really don't ring a bell: We are talking about racing games which are viewed from the top with the complete track being visible the whole time. So there is no need for scrolling; on the other hand, the cars are quite small and the tracks are relatively simple – a race rarely lasts longer than a minute or two.

[Wandrell] The idea is that each stage is going to be quite intense, with small roads and lots of curves. Supposedly, each track has it's own gimmick, that may be a secondary path, a section of dirt road, bridges or just more complexity. Sadly, the tracks never get many of these extra features.

[Mr Creosote] In this particular game, the view is not completely top-down, but slightly tilted. Which looks good, but it does not reflect in the controls which always work as if you had a straight perspective. So much for realism, but this is not what games of this genre are aiming for anyway.

[Wandrell] Not that you will notice when playing. As the game is centered on the adrenaline part of the race. You should be the first, no matter what, even if that means kicking the other cars out of the way. And the incentive they offer for this is money, which you can expend improving your car after the race.

[Mr Creosote] Of course, this leads to the usual chicken and egg problem: The fast drivers will get even better, because they can afford better upgrades. However, what I strongly dislike in most of these games is not a problem here: Even if you don't win every race, the game will go on. There is nothing more frustrating than having bad luck in the tenth race and being forced to start all over again. 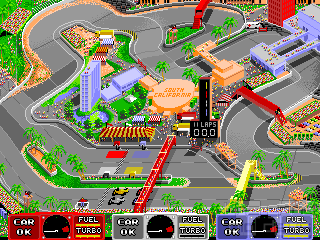 [Wandrell] Well, I was looking for any mechanic to exploit when I started playing and found a way to solve all these problems. Just expend all your money on fuel efficiency, and then when the other cars go to the boxes you just hit them back into the race. Once you have improved enough the efficiency, you won't need to hit the boxes even once, but the other cars will end trying to run with no fuel left. This cheap trick made me finish first most of the time.

[Mr Creosote] OK, there are basic tactics/cheats which might make you win. However, it has to be said that the AI drivers are quite competent in general. Of course, playing alone is basically just practice. This is a multiplayer game at heart – up to three players can participate and it is much more fun racing against your friends.

[Wandrell] While the yellow car, the one always controlled by the computer, keeps staying a few steps ahead of you, the other two never seem to have a good idea of what's going on. Also, I think these two may be expending the money they get on turbo boosts and improvements, while the AI-only one, of which you can't see the fuel and turbo bars, is just cheating to keep challenge. But, yes, it looks like the game would improve a lot having two other players.

[Mr Creosote] So that's that. This is a by-the-book arcade racer. Even just a quick look at the screenshots should tell you everything you need to know about how it's played. It's by-the-book feature-wise, but the carefully designed tracks, the decent challenge and the attractive look make Indy Heat one of the best in the genre, in my opinion.

[Wandrell] In my case, I think this one is short and easy. I ended being a bastard to the AI, doing what can only be called a psychopatic pit stop (getting into pit stops running over the other cars and their teams), to do the fuel cheap tactic, because it was missing something. I suppose I'm used to having bonus around the track, some of which can be used against your opponents, and instead I get things like having to buy back the boost, which is an artificial way of increasing difficulty.

Also the tracks are plain. And that's how the game feels, plain, missing something. It's fun, but once you beat it, easily, there is no reason to play again. Except, of course, multiplayer.

So to me it's nice, but feels more like the basis to make a more fleshed out game.

APS (2012-08-08):
This game is a port of the arcade game "Danny Sullivan's Indy Heat". I remember playing a demo on the Amiga that still contained Sullivan's name, but for some reason they dropped his name from the actual release.
[Reply] 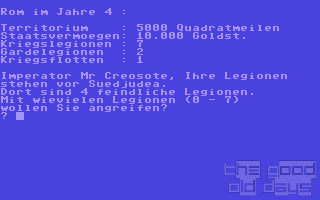