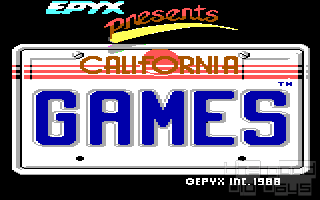 California, as films tell us, is all beaches and hot women but this games pretends otherwise, they also have their own brand of sports. Sports for cool people, obviously but sports which, lucky us, we now have the chance to try without leaving our homes.

Not that this huge selection will keep us in front of the screen for long, as there are just six sports, few of which are actually unexpected: halfpipe, footbag, surfing, skating, flying disc and BMX is all you will get. I wouldn't think on BMX would fit on the game's theme, and it's not even played next to a beach but on a desert.

But maybe it's that these are not meant to be just beach games, if you look at it from another angle I have the feeling they meant the theme to be “thrilling sports”, and there is the main problem, you see. You have halfpipe, surfing, skating and BMX, which are short of actionish sports, even if you also get the flying disc (not much thrilling unless you are a dog) or the footbag.

Now, just wait a moment. I know I was going to get into an important point, but that footbag thing is, at least to me, an icon of this game. I've never seen it outside California Games, and it's the most original of these sports and also the most fun, if we forgive how long (and thanks to it, also repetitive) it is. The way it works is very simple, you have a small ball, or at least I think it is a ball, which you have to keep going on the air hitting it with any part of your body except for the hands Your technique gives you points, along the bonus of hitting seagulls in mid-air, which also gives points.

And here I go back to the actionish sports thing. That's the main problem of this game, I have the feeling they wanted it to be more arcade than any other of these Olympics games, but failed at it. The sports still are a painful exercise of deciphering the controls, and all the fun they can give is short lived, as they are all very simplistic and repetitive games.

Yes, there is no doubt I don't like this game, but actually, this is part of the reason I wanted to review this game. The other part is because, you see, I may not like the original one but I do like the second part, which is actually fun as there they finally decided to really mix arcade with sports, yet at the same time is still a sports championship game.

Due to that this game ends being a shadow of the sequel, and it's not just because it was surpassed, it didn't even getting close to the goal. Just try the surf game to clearly notice the problems here. There is an attention grabbing game where you are riding on a wave, chased by the dying end of it, trying to stay the longest time possible on your board, but the awkward controls and the repetitiveness kill it. You expect adrenaline and all you get is the usual pseudo-sport-simulation where you have to fight against the game's input system.

This happens to all of the sports no matter which one you try, even those easy to understand such as the throwing disc one get overly complicated in one thing or another. The disc, which just consists on a marker moving through a bar and stopping it in the correct interval, ends having it's own indecipherable trick: you don't have to stop the mark in the green mark, because then the disc will fly too far. But nothing tells you what is the correct angle and force, unless you try and try again.

Maybe it's just I don't like this genre and I'm being too hard with the game, or maybe it's just I am being unfair comparing it to the sequel. The only thing I can say for sure is that I prefer the second game, and no matter the sports are different, you would do better playing that one and keeping away from this.