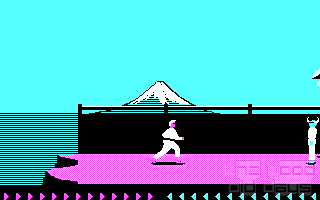 Long before your encounter with wicked Jaffar and conquest of make-belief Persia you used to be a karate martial artist sporting a fancy kimono. Your formerly sworn enemy was a cruel japanese warlord Akuma who having besеt your country had also kidnapped your beloved Princess Mariko. I don't suppose you need further directions now, do you? As far as the old “good guys vs bad guys” tradition you must now follow the trail of Akuma into his fortress situated up on a cliff, defeat a number of his guards along the way who are also trained in karate, and finally vanquish the tyrant himself to save the princess. In this game steel weapons have not been invented yet, so you can only rely on your bare knuckles and feet.

Karateka is a 2D cinematic fighting scroller and is the first game on Jordan Mechner's list foregoing his bigger commercial success known world-wide as Prince of Persia. Being originally an Apple II release and dating as far back as 1984 it was found among the earliest video games introducing a fully flourished Martial Arts theme. During later years Broderbund had released several other ports for C64, CPC, Atari 7800/800XL/ST, PC98, NES and PC in 1986. All of these show little difference except Atari ST version is slightly enhanced and PC as usual takes the lowest position. It's now a well-known fact that back in mid 80's there was nothing as notoriously backward as CGA display as opposed to graphical potential of the majority of 8-bit machines.

Starting at the east edge of the cliff you must proceed west to reach Akuma's fortress and advance further within his premises until you finally arrive at his personal chamber where the final battle is to take place. You can either run or go combat mode if attacked. There are gates and doors to pass which essentially demarcate 1x1 bout areas of varying dimensions, where Akuma's guards incessantly scurry to assault you one by one. There is no way you can get past them save for their dead bodies, which means fights are inescapable. Sometimes you get assailed by Akuma's hawk who moves twice as faster than guards and requires quicker reaction. You must also watch out for deadly portculis which is apparently a prototype for metal jaws hazard used in Prince of Persia.

Combat mode puts you in a fighting stance and enables 6 additional fighting moves - 3/3 types of punches and kicks, high, middle and low, which both you and your enemies enjoy equally. In fact, your adversaries are really just multiple clones of yourself only donning different helmets. Like in Prince of Persia, it is important that you go combat mode prior to getting attacked, for one hit from the enemy will knock you out cold if not properly engaged. You must constantly alternate running and combat modes while advancing forward as quickly as possible to reduce the number of possible encounters and a risk of getting overwhelmed. Like in Prince of Persia your life-o-meter is a set of triangular marks where one hit equals one lost energy unit. Your energy is restored every once you kill an enemy.

And now the devastating critique. Quite honestly, I never really found this game particularly entertaining for a handful of good reasons. First of all, I'm not at all satisfied with the fighting model provided here. The moves are ridiculous and non-karate like, let alone four of them seem to be completely redundant. You could really dispense with just one type of kick and punch unless you want to benefit from many eye-pleasing graphic alternatives which are less pleasing than expected and get old pretty soon. Your character is incredibly slow, enemies are your multiple copies (except Akuma himself) and... why the heck are you blond anyway? To top it all off, there are no blocks, jumps or ducking, which to my knowledge is an integral part of martial arts style gaming.

The truth is, this game is not exactly a beat-em-up but actually a very poor 1x1 fighting with a succession of tedious bouts and very weak platform action. In other words, it's very boring, repetitive and completely devoid of amusement factor. While I'm perfectly aware this game may not exactly represent the age of maturity of fighting genre, I can yet come up with several better examples where antiquity as such doesn't seem to affect the overall quality. So, time is clearly not the case here, but rather just raw and incomplete design as though this game was just a hasty experiment. Although, on the outside it may appear somewhat appealing, the very gameplay wishes a lot to be desired. As a precursor to Prince of Persia it is surely a promising sketch, but hardly a good game. 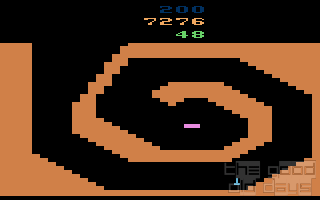