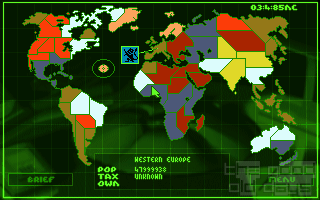 The future. Several syndicates control different regions of the world, and there's a war between them. You must take the role of one of the organizations and perform a variety of tasks to "capture" the regions one by one until you control them all.

The game has a 3/4 isometric perspective (think X-COM) but is (thanks GOD) real-time. When you first start, you must select the name of your company (syndicate), the logo, and the color. Later on all captured territories will be this color. After that you are presented with a map of the world, showing all the different territories. You can choose which one to play by clicking on it, but only if it borders one that you own already (just let the game pick for you and you'll be fine). Then you are presented with a menu. In the game you control (up to) 4 cybernetically enhanced Agents. You can outfit them with weapons and stuff, research new technologies, swap team members and further enhance your agents (better legs, eyes, hearts and so on) after you have researched the necessary upgrade.

Should you choose to accept a mission, you have a choice of "enhancing" the mission map and getting extended mission info - all for a small price. Both are recommended if you can afford it. Then you click "ACCEPT" and the action begins.
You can choose to control you Agents individually or as a whole. On the left side of the screen there is a control panel - weapon selection, map and a small status bar that tells you what to do next. You can follow your objective or you can just go around and kill innocent people - or both. The missions consist of a fairly limited set of tasks, variations on a theme: you have to subdue the local resistance, capture VIPs or best of all go on a combat sweep where you just blow the heck out of everything that moves. Later on, the range of weapons and cybernetic add-ons improves as the game goes on. You can allocate more resources to develop your technology faster. A busy network of streets filled with pedestrians, vehicles and enemy agents is your battleground.

The graphics were great at the time and are good even now. The pseudo-3D perspective lets you see quite a lot of the surrounding buildings and landscape. I didn't manage to run the game with sound so no comment here.

All in all a very good game - one of the few (which are getting scarce lately) that make you actually come back and play it some more. Download it now, it's worth it.

Syndicate is one of my favourite games.

Don’t get me wrong it is indeed very very flawed and you almost need to exploit the game’s technical limitations and flaws to beat some levels, but even that part makes this game what it is - a solid action game with creative micromanagement system in form of gauges you need to tune skillfully to win!

Syndicate is not all about action, it's also a management game and the management aspect is not that bad either. You have to pump money into this or that research field to develop new hardware and improve your odds to win. Balancing taxes is this game was an interesting addition, but not very well executed (read - "kind of useless").

But what strikes me most about the game at the time was a brilliant use of 16 colour 640x480 graphics mode. I have never seen anything like that on my 386 back then and was blown away but the quality of graphics, design and the precision with which the cyberpunk corporate urban setting was executed. The streets of Syndicates cities look almost like they came straight from some sort of 90s cyberpunk animated series. Even further - the game takes place during the daytime which is unheard of for a cyberpunk themed world! Loved it to bits for this minor detail.

There are also 2 major gripes about the game which can spoil all the fun for some. The cars are absolutely garbage. Learn to drive them early or you will be in a lot of trouble while trying to beat the simplest of missions. You are supposed to drive on a left side of the road because the game originates in the UK. And the second problem is enemy AI. In some missions you have to exploit AI limitations and lure enemies one by one or your unit will be decimated in no time.

Hope setbacks won't spoil your fun with this fantastic game with a unique design and (probably till this day) unique gameplay mechanics.

The following web site has some really good information on running Syndicate on new computers:
http://syndicate.lubie.org/synd/html/synd_run_newpc.php