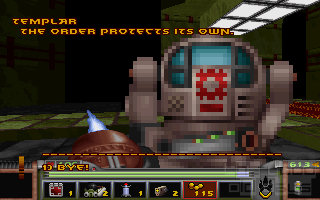 Shooters have a tendency to lack story or at least a bit of depth, consisting in nothing more than pressing a button and moving forward. Yet a few like this one shine and reach a higher mark than the many which try only to be a copy of the famed game from where Strife takes its engine, Doom.

Here you are a mercenary. Really you are more like a killing machine that joins the rebels against the nearly all-controlling order made of high-technology cyborgs that appeared shortly after a meteorite fell on the planet bringing with it a plague. Well, the plot is not spectacular, but becomes a good story for this kind of game.

They are brainwashed cyborgs as you can expect, and in a somewhat anachronic fashion they wear plate armours and shields along their automatic rifles, following the mix of ancient and futuristic that gives a special mood to the game.

Getting into the gameplay you find a surprise, as not all is about shooting. Many times you will go around peacefully, thanks to the official papers you got, the suit you stole or just because it is a peaceful place, like the town a good part of the game revolves around.

Until you shoot or cross a sensor, because that triggers the alarm. As long as you act non-violently and look where you step you will be able to explore, talk to everybody and spend your money in the shops of the place.

Yes, you buy things. During the game, mostly after each mission, the rebel group called the front gives you a handful of coins to be added to your inventory. It is not as much for getting more ammunition and weapons (they are left by enemies and stolen without anybody caring in many places) but for equipment.

Things like armours, healing kits and hazard suits for protection against energy weapons and poisonous places. Or more exotic things such as the stealth suit, which will make your enemies open fire in your general direction instead of directly to you, or the teleport beacon, a reinforcement creation tool. They can be bought in many places and are vital to keep being a one man army.

But there are two other important items received as payment, papers that will allow the medic to increase your life and the armourer to train you, so your shots go straighter towards your enemy (an important thing as the gun pointer is an object that last only a short time).

Still there are other things that improve the game, the first are the levels, which aren't the typical labyrinth with four keys and an exit. They are complex, entertaining and filled with hidden zones, but more importantly they are not levels, but parts of an enormous map that you can revisit whenever you like.

Adding to this are the secondary quests, some of which are asked to you, like breaking the computer that controls the brain implants of the miners, and others are just heard, such as that a shipment with the most powerful weapons have just arrived the base. They are things you don't have to do, but you can do for a little reward, or not so little as at least one of them affects the outcome of the game.

Having a good mood and a good (for this kind of game) story that has a bunch of different endings is what puts this game apart from other shooters. Here you don't cross a prison because it is in your way, you go there to rescue people, nor you capture the castle alone, a good bunch of soldiers goes along you. It's the kind of thing that makes the game more entertaining than your typical kill-all-that-moves shooter just fun for a bunch of levels.

Yet, it is not perfect. As the game advances levels get bigger and more complex, too big and complex, and ending in a thing I really dislike, big bosses with cheap attacks. But that can't make this gem not shine. 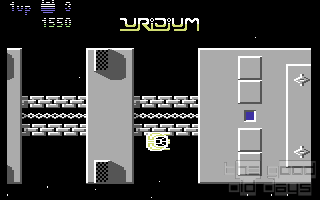