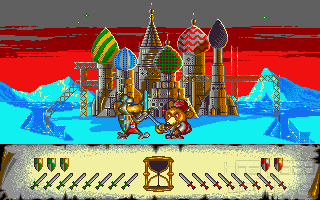 I'm not really sure how I got to own this game... my guess is it came from one of these sales where the stores would just throw whatever they have left of unsellable stuff on a huge table and be happy about anyone ridding them of anything. So the price would have been low, and the expectations about the same. At least I have no recollection of being seriously disappointed.

Which, when looking at the game itself, is quite remarkable. Although graphics and sound are up-to-par, it's hard to believe that Crown was made in 1990. Gameplay consists of simplistic arcade challenges reminiscient of the Atari VCS era. Story-wise, it concerns a kind of battle / tournament to become king of all creatures. The contestants are a British dog knight, a Scandinavian viking (of an non-identifyable animal species), a Russian bear dancer. a Japanese squirrel samurai, an Indian elephant and an Arabic monkey on a flying carpet.

The character chosen by the player travels from one opponent to the next to fight them. The fights have been designed in the style of Karate Champ and its successors, i.e. each of the nine directions on the numeric pad of the keyboard (or the joystick) triggers a different move. It's all quite slow and unresponsive, but at the same time incredibly easy (just hold 'up' and 'fire' to beat every opponent).

The travelling is done differently for each character. You don't have to play the level of the characters you're travelling to next, though, but your own character's level each time. So, if you're the monkey, you have to fly your carpet collecting magic lamps five times, if you're the elephant, you have to walk across a neverending bridge, avoiding banana peels and sucking mice through your trunk (ewwww!), if you're the bear, you have to dance along with some sort of pirate (?) girl to earn coins and so on.

None of these levels is particularly engaging. More importantly, all of them have been done better before (even the dancing stage...). Yet, as I said, I wasn't really disappointed when I got the game, and even played it quite a bit back in those days. In a way, I can still see why: It's simple in a relaxing way. Ok, some of the levels aren't, but looking at the game as a whole, it would have been quite alright (but still not good) if it had been released prior to 1985. 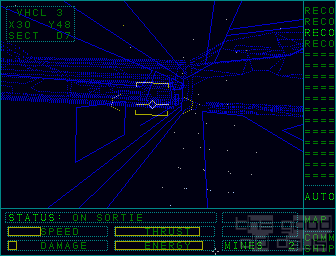