The Spy Who Loved Me
for Amiga (OCS/ECS) 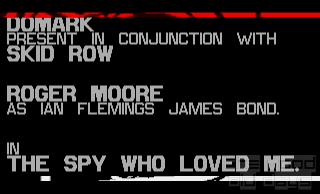 My name is Bond - James Bond! This game is based on the movie starring Roger Moore. I suppose everyone has seen at least one James Bond movie, so I won't explain what that is...

Domark took the action parts of it and put them into levels which are only loosely connected with short text-based explanations about the story. Most levels are basically the same. You see your vehicle from top and have to reach the level's exit without being killed. These vehicles are either a Lotus Esprit (driving on the road or diving under water!) or a small motor boat. From time to time an enemy appears and you have to shoot him. If you don't have any missiles left, it doesn't matter too much - just let him drive in front of you and avoid his shots! Sometimes a big truck labelled 'Q' appears in front of you. Don't try to destroy or overtake it (like I did when I first played the game 10 years ago

- It's your friend 'Q' who 'sells' you equipment for the 'Q'-coins you've selected before!

But there's also another type of level: The shooter. You'll know this one. Just point the cursor on everything that moves and shoot it. Although the setting changes, it's basically the same all the time.

Even though Domark actually did convert the action sequences quite good, it's still not too good a game. It simply doesn't feel like Bond! The old movies weren't just a series of explosions and fights (ok, the new ones are, and that's why they suck!), but there was more behind it. James Bond slowly discovering the evil guy's plans by simply talking to him! James Bond 'convincing' lots of girls to change sides! Nothing of that is in the game. And that is why it fails as a movie conversion. Still worth playing as a simple Arcade game though.

Mr Creosote:
Feel free to share anything about The Spy Who Loved Me (1989) here!
[Reply] 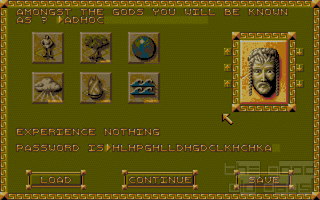