Where do all the reviews go?

An old site reopened its doors recently: Anarchy. As you can read on their own 'about' page, it has a long history. Although it never was a huge site even by the standards of those days (the average site size has increased significantly over the years), it had its share of contents. Now, Knyght (the webmaster) started fresh, with just one game and even that review is new.

This is actually a very common phenomenon: Sites which reopen do so with all-new contents. It happens all the time. I'm not going to tackle the question of why they shut down in the first place. Although this is sometimes done in haste, too, it's not the subject of this article. What I'm wondering about today is: What happened to the old contents?

There are of course good reasons / cases when not to include old stuff anymore. If a site got a focus change, for example, old contents might not fit in. If what one produced earlier doesn't match new (quality) standards anymore, it's out. All very logical.

However, it doesn't seem to be the case most of the time. Take Anarchy again. Admittedly, Knyght always adds Dune to any of the incarnations, so he must have written about it multiple times about it already, and it's not like the previous versions of his site had lesser quality reviews (ignoring the C64 section - sorry, but that was really crappy ;)).

Sure, old contents are always somehow stale to the one who produced them. I've often contemplated throwing out or redoing old write-ups myself. From the perspective of the non-concerned visitor, it's new anyway, though, so it doesn't matter. So whatever the reasons might be, we (as in 'Abandonware as a whole') are going in circles. Doing the same things again and again, instead of moving forward.

Slightly different, but very similar: What happens when sites shut down? Their contents usually disappear from the face of the net completely. Many years back, Vohaul of BSOD did something very unusual: When shutting down his site, he gave all his reviews and screenshots away to other webmasters for use on their sites (you can find one of them here - look for it). Why was this such an exception? If one looks at it from the outside, it was the right thing to do - the contents were preserved. Sidenote: Ironically enough, most of the reviews went to Classic Trash back then. That site has been dead for years now, while BSOD is online again - without those old contents, of course.

Of course, there are always differences between sites which have to be overcome when moving contents to another home. Standards differ, style differs. However, it should always possible to find a responsible webmaster whose goals are similar enough so that only minor adaption work has to be done. And style? Only very few webmasters shut others out from contributing to their sites, so that's a non-issue anyway. Hell, I even actively went after NetDanzr to ask for his permission to put his old reviews up here, in spite of them all containing one of my pet hates. It just doesn't matter.

Imagine what we could have achieved over all those years if we'd been willing to cooperate just a little in the ways I described - even if it would only be cooperation with our own former selves. For the sake of the games, I can't find a single reason against it. And isn't that what we're here for? 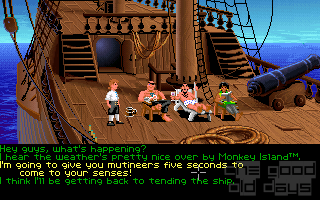