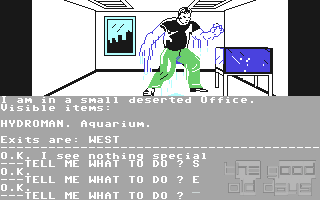 In retrospect, Scott Adams' star had begun to sink by the early 1980s. At the time, his company Adventure International could still call itself the market leader in text adventures, having amazing past sales figures to show for. This enabled Adams to land a couple of licencing deals, one for an upcoming blockbuster movie (which turned into a fatal flop), one for a TV series (which nobody watched) and finally, he struck a seemingly lucrative deal with Marvel comics – which turned into the final nail in Adventure International's coffin when payments were not made a promptly as expected.

Launched in 1984, Spider-Man was the second in the Questprobe series (originally planned to consist of twelve games). The first half of the 1980s were not exactly a great time for comicbooks. This collaboration happened before the big renaissance triggered by the likes of Watchman or The Dark Knight Strikes Back. At this time, they were still simple escapist stories made for kids – although less and less kids were even still interested. The accompanying pack-in comic, framing the plot for the game, illustrates the sheer goofiness perfectly, with dialogue lines like “You seem to have taken leave of your senses, Spider-Man! Which gives me the opportunity to pummel you into submission!” The next time Spider-Man became cool again was a couple of years later, when David Michelinie and Todd McFarlane teamed up for an “edgier” plotting and look.

It may not have been a good timing, a good project, with two parties both on a downward slope teaming up. Again, hindsight is 20/20. 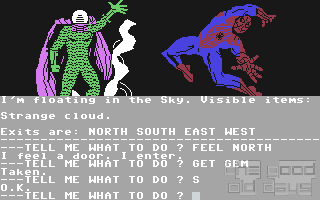 Spider-Man meeting all his greatest enemies

Starting off from said pack-in comic, what is the game, then? The two make for a weird symbiotic relationship. Whereas the former opens up an ultra-convoluted plot frame revolving around peace-loving and warmongering aliens, deadly space fleets, a supercomputer controlled by a gem which is in turn controlled by a glowing egg and a mysterious, newly introduced figure calling himself the Chief Examiner seeking to “understand” (or suck out or copy?) the powers of all of Earth's superheroes, the game itself is completely devoid of any storytelling in turn.

Rather, Spider-Man is simply put into a building where, for no apparent reason, some of his worst enemies also roam around. The quest involves gathering gems and taking them to Madame Web, an oracle-like ally of the hero. After the printed introduction, we're probably meant to believe that all this is some sort of illusion created by the Chief Examiner to test Spider-Man. When in fact, it was very likely simply created backwards: Scott Adams did his usual treasure hunt design and an excuse was needed to frame it.

While other companies were clearly already pushing the boundaries of the genre, Adams was still relying on the ageing formula his initial success had been built on. Spider-Man is a very old-school adventure game of gate-keeping, unlocking paths and finding hidden objects.

Characters are treated as purely mechanical objects. Whereas the comic is overwritten to a painful extent, the game is devoid of expository descriptions or dialogue. The final product does not give the impression that Adams, or any of the other people involved at Adventure International side, had any interest in the universe they were operating in here, above the lure of the brand name. 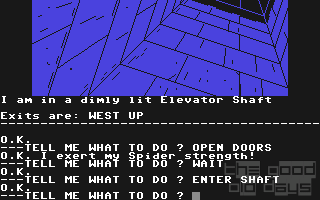 Time for some climbing!

As far as puzzles are concerned, there is at least some thematically satisfying action to be had. Spider-Man gets to climb some impossible surfaces, and special abilities of the villains are also featured prominently – in one case, leading to an especially imaginative solution to a problem when a person is literally turned into an object and then “used” in appropriate fashion. Those instances aside, puzzles are standard fare, ranging from doing the obvious to searching everything and (rarely) performing absurd activities, because another “hard” puzzle was needed. The box gives the difficulty level as “moderate”. Even this may be a slight exaggeration, considering even death is not fatal. Hey, didn't I just claim Scott Adams' game design did not evolve? I was wrong at least in this respect.

On the technical side, the C64 version features some static location illustrations. In places inspired by comic character poses and gestures, they overall unfortunately cannot be called a major asset to the game, being broadly barebones, devoid of detail or artistic imagination. Other versions of the game were even text-only. This, at least, ensures that it is never actually necessary to figure out what some indistinctive pixel-mash is supposed to represent, as important objects will be referenced in the text as well.

Last, but not least, the manual boasts that the input parser is able to understand full sentences. The bleak reality, on the other hand, is that it's still the usual VERB NOUN sort. Barely disguised by a mechanism to filter out some additional words. When push comes to shove and you want to SPRAY WEB, the game will still ask you AT WHAT, for you to give the target in a second two-word command. Just as it was in the 70s.

It all adds together to the picture of Adventure International being under quite some pressure by this time. The likes of Infocom and Level 9 were leaps and bounds ahead on input/output interaction as well as more interesting world-building. The Hobbit had shown how even crude graphics could spark the players' imagination, and that a well-known licence could be turned into a commercial success. Spider-Man, however, is a half-hearted baby step at best. It doesn't make a whole lot out of what was a fairly weak licence to start with at the time. Gameplay and technology-wise, it's serviceable in most tangible ways, but certainly nothing to win back any customers who had mostly moved on by then. 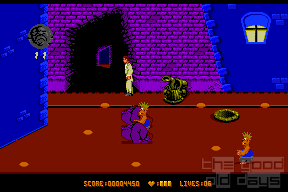