The Hobbit
for ZX Spectrum 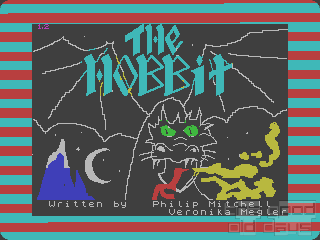 If you think text adventures, you probably think Infocom and PC. However, even with all the freeware text adventures as a result of a huge fan base, the Spectrum is still the primary platform for text adventures. With over 1,400 commercial (or semi-commercial) text adventures for Spectrum alone and countless more that were made thanks to the simple programming language, the Spectrum was a heaven for all adventure fans. In hindsight, it's not surprising. In the early 80s, PCs were still very expensive, Apple II had too good graphics to bother with text games and the rest of the crowd were consoles, only few of which had a keyboard. Spectrum was perfect: with a 3.5MHz processor it was pretty weak for high-res graphic games, yet because it was also a programming platform, it had a highly functional keyboard, perfect for text adventures.

Hobbit was one of many text adventures, but one of the few based on a best-selling book and one of the even fewer following the original rather closely. This game alone has brought more gamers to text-based adventures than any other. Mainly due to its relatively large advertising campaign and the incorporation of graphics, many unsuspecting gamers got the game, oblivious to the fact that it's not what they'd expect. Yet, many of them (including me) got hooked to this kind of a game, and remain hooked until today.

The game itself is relatively bare-bones. The screen is divided in to two parts: the upper part starts out with a picture of your surroundings, which later scrolls up and reveals the effects of any action you take. The lower part is the text parser - here you type in your commands. In hindsight, this is not one of the best text adventures. The puzzles were rarely logical, death way too common and the graphics, albeit simple, took ages to render, even for a Spectrum user who should be accustomed to slow speeds. However, the game was not incredibly hard, and if you read the book, you basically had your walkthrough. It was real pleasure to play Bilbo, and only through dying so often you realized how serious the book really was. This was the first time I realized that there's no such thing as fantasy fairy tales, that you can die as easily in a fantasy book as in the real life.

The main accomplishment of The Hobbit doesn't lie in the gameplay, graphics or perhaps the story, however. It lies in the fact that it has introduced many new players to text adventures and established Spectrum as the dominant platform for this type of games.

NetDanzr:
Feel free to share anything about The Hobbit (1982) here!
[Reply] 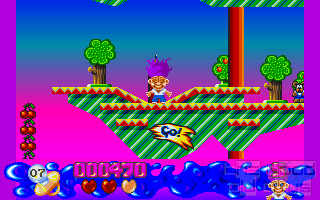