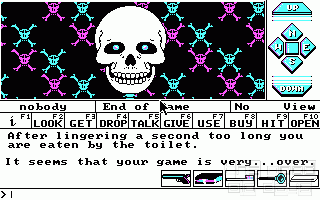 Overall, however, this is one of the more interesting adventure games. Real-world logic gets you killed here, yet all puzzles are logical in their own way. It helps that all inventory items will be used as well and that other characters are willing to give you additional information. If the graphics were better and the creators concentrated more on the story than on different ways to get you stuck or killed, the game would have been a gem. Right now, it is “only” an above-average adventure game from late 1980s?

About the authors
Andy Gavin and Jason Rubin. Developing this game under the label JAM Software, the authors were relative newcomers to the world of gaming. Previously, they have released Ski Crazed, a “game that almost, but not quite, completely failed to evoke the thrill of downhill skiing”, and which they sold the publishing rights to Baudville Software. That game was a major disaster, according to the authors. They did not despair and sold the publishing rights to Dream Zone to Baudville again, which, according to the authors described as “created by its founder as a tax loss”. At that time, both authors were only 17. In 1989, the company signed with Electronic Arts, changed its name to Naughty Dog Software and published Keef the Thief. A few years later the company published Rings of Power for Genesis, followed by the sub-par (yet popular, for some reason) Way of the Warrior for 3DO. The hey days of the company started in 1996, ten years after it's been established as JAM Software, by developing the first game in the Crash Bandicoot series. The company has been recently acquired by Sony, is still active and very proud of its history, which is a dominant feature on its Web site. I may add that the authors evolved as well - the site is much more funny than their first hit game, Dream Zone. 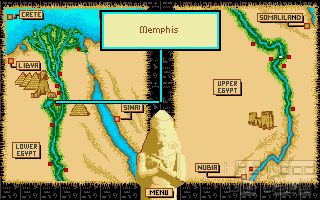