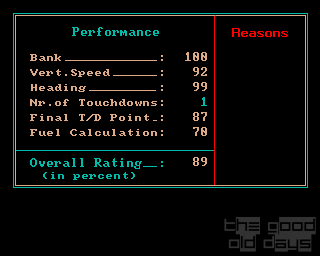 This one's almost notorious… hailed for being super realistic, because three years of programming work by a real-life pilot had gone into it, it having been developed in cooperation with Airbus and Lufthansa… and, as every single contemporary review will point out, a thick manual sporting 150 pages of detailed descriptions of virtually everything, including basic explanations of flight physics, plus an even thicker book of approach routes towards all major western European airports are contained in the package! Wow, right?

Well, it depends what you are actually looking for in a 'realistic' flight simulator. The 'realism' tag, in this case, seems to be used mostly in the sense of all featured airports' locations, ICAO codes and VOR frequencies having been meticulously documented. 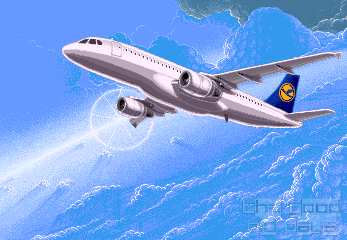 Also, it could be argued that the handling of the simulated aircraft with the joystick is sort of similar to a real A320's sidestick (which is analogue, while the standard Amiga joystick is digital…), though that's more a virtue of the (back then) groundbreaking fly-by-wire technology which this aircraft introduced rather than the game. The real aircraft got closer to computer games rather than the other way around.

What the game doesn't even attempt to simulate, on the other hand, is the handling in different flight control laws. Why would it, since there are no special events, like malfunctions of virtual flight control computers? Bad weather is limited to fog (which simply turns the complete screen grey); no heavy turbulences, no snow or rain. All of which is a blessing for the flight physics model, because this way, it can stay extremely simplistic. So much for the touted realism.

With a long list of things this game doesn't do, what is it that it can? Well, basically, it will let you fly from airport to airport. Like a real pilot, you have to do the weight calculations depending on the number of passengers and cargo (basically a lookup in one of the tables of the manual) and plan the amount of fuel accordingly. Then, you look up the appropriate coordinates and communication frequencies for your target airport. Engage the engines, set the flaps, accellerate, lift off, retract the landing gear, engage the auto pilot (or set the course manually if that tickles your fancy) and… wait. When you're there, either attempt an automated landing using the communication beacon or put the aircraft down manually.

That's all fine, but the real issue lies in the time in between. How long does a flight from Frankfurt to London take? Let's say 1.5 hours. So basically, the game will make you stare at a hardly changing panorama for that amount of time (even the time compression will not compress a lot). No need to interact at all. The course is set anyway and even if you wanted to take a detour, why bother? The game world may be quite extensive, but it is also empty; apart from the airports, nothing is really modelled. The most exciting things you get to see will be streams, because cities are nothing but grey two-dimensional areas between the two-dimensional default green ground (so no flying around three-dimensional objects, like skyscrapers); in fact, there are no height levels in the game at all – no hills, no slopes, no mountains, everything – land and sea – is just flat. Oh, and of course, night mode only swaps the colour palette of the disappointingly non-detailed and slow graphics. 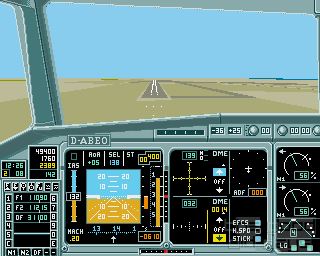 The purpose of it all is to enter career mode and, through collecting flight hours, rise in the Lufthansa ranks. Though even in that mode, only the airports and loads will be given per mission. No time challenge, no slot congestion, absolutely no air traffic making it necessary to fly at specific heights etc. So it's an end in itself. Launching and landing, lauching and landing, launching and landing; over and over again.

Now, if you get over the fact that A320 Airbus is really far from realistic, once you realise and acknowledge that the involvement of Airbus and Lufthansa certainly did not exceed the granting of name rights for promotional purposes, and given the severely limited choices in the niche genre, you may want to try this one anyway. Certainly, the basic flight model isn't horrible and the manual makes it easy enough to handle the flight preparation with its somewhat authentic charts etc. (sorry, not going to scan all of that…). What's just disappointing is that almost ten years after Solo Flight, there is hardly any progress in the civil aviation genre. A320 Airbus simulates pretty much exactly the same things as the older game did, and not in a much better way.

Not being a pilot myself, some bureaucratic preparation work, lift-off, then staring out the window for hours before finally touching down does sound like a realistic representation of that job to me. What pilots are really there for is the situations when something goes wrong, however. Not that any real pilot would ever want that to happen. In a simulator, on the other hand, these could bring the much needed excitement. Somehow, when designing this game, they left this part out and focused on the barebones activities which professional pilots are paid to do.

Nevertheless, marketing did its trick and the game sold really well. It spawned two expansion disks (one with more European airports, one with North American ones) and a widely ignored 'sequel', which was really not so much of a sequel rather than a collection of the original including the expansions with tiny alterations. The series ended with that.

Herr M.:
Originally posted by Mr Creosote at 19:51 on February 5th, 2016:
How long does a flight from Frankfurt to London take? Let's say 1.5 hours. So basically, the game will make you stare at a hardly changing panorama for that amount of time.
That is one of my main gripes with civilian airplane-simulators in general: They are bit too realistic in this degree. Even if the panorama changes it is rather boring to sit around for hours and do nothing (with the one or the other slight course correction). But making this the main gameplay element seems rather brave. 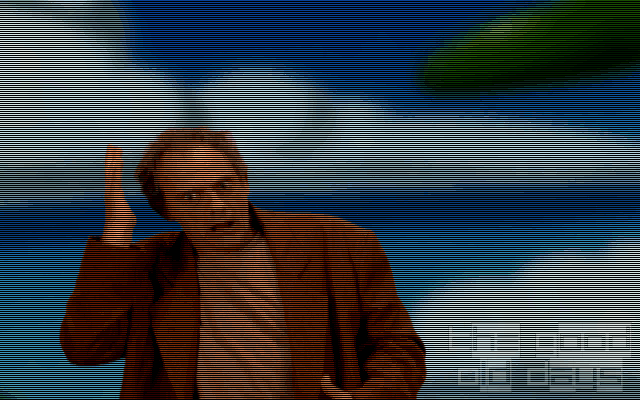