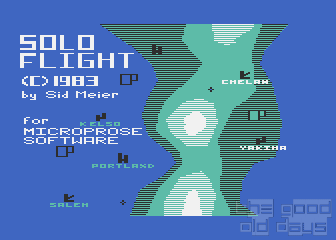 Although it later became primarily associated with the Civilization series, Microprose's real legacy lies in the flight simulation genre. Two of their very first releases were the WW2 themed Spitfire Ace and this game, Solo Flight, to this day one of the few civilian flight simulators.

Solo Flight extends the premise of subLOGIC's earlier S1 Flight Simulator insofar that it adds a purpose to the pure simulation. Instead of just aimlessly flying around for the sake of it, you can choose to deliver mail to other cities in the simulated part of the US. The challenge being to plan how many bags to take, how much fuel to load and in which order to deliver them (i.e. which route to take). Though, as common in those days, drawing satisfaction from this purpose is purely left up to the player, because above having fulfilled a mission in the best possible way, the game offers nothing in this respect. There is no meta game letting you earn money, have any sort of career and even a highscore table is absent. Whether you even try to fulfil any mission or rather fly around aimlessly is entirely up to you. 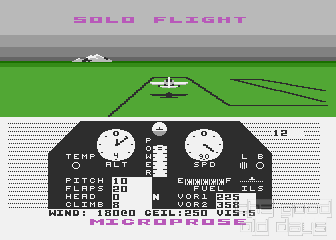 So, in the end, the game is 'just' about flying. It does hold the distinction to be one of the first actual flight simulations (as opposed to arcade style games involving aircrafts). The implemented flight-related functionality does not stop at setting the thrust, controlling yaw, pitch and roll and playing with the flaps a bit. Landings can actually be supported by a virtual ILS (instrument landing system), a radio-based automatic guidance system of modern aircrafts. The game even allows the player to try full instrument based navigation: Simulating extremely foggy conditions by turning the whole screen grey, VOR (VHF Omnidirectional Range) and DME (Distance Measuring Equipment) can be used to plot the course in purely mathematical terms – just like in reality. No, these radio-based technologies have not been replaced by GPS (Global Positioning System) these days; they are still available and will continue to be so. So what Solo Flight teaches the player here actually continues to be relevant.

Of course, you might ask the question how much fun it can be to stare at a grey screen for the whole flight while occasionally reading a few numbers from your instruments, but if you are up to a flight simulation, this is an integral part of a realistic flight model and let me tell you it can be very satisfying when – after a long 'blind' flight – you slowly go down, the grey slowly dissipates and you can actually see the airport you've been meaning to target (i.e. your calculations were correct)!

There is a reason why these civilian flight simulations have never become as abundant as their military cousins: Their target audience is just smaller. Not because most people are militarists, but simply because they provide less excitement. Let's say it's harder to get the adrenaline pumping while literally sitting through an hour-long flight with nothing significant happening. Course plotting, regardless of the degree of doing this visually or machine supported and landing are the major tasks of the player. A couple of engine failures can randomly occur on higher difficulty levels (or be triggered manually at any time Sim City style). That's pretty much it, though.

Purists can and will argue that this is what a flight simulator should be about in the truest sense of the word: It's the attempt to simulate what an actual pilot's job would be like. For those who find this fascinating, Solo Flight is an impressive piece of work, even more so considering its age. And if you think about it, it is rather nice to actually have the task of just helping people without any negative side effects for anyone else in such a game for once, isn't it? 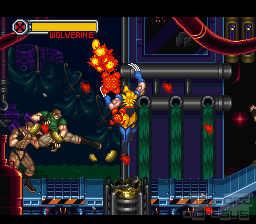