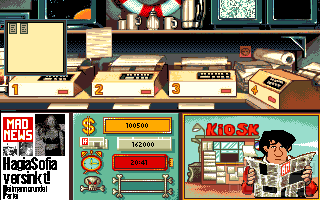 Mad TV's success virtually begged for a sequel. Rainbow Arts announced Mad Burger, a fast-food chain simulator. Ralph Stock, designer of the first part, had left the company, though, and he was working in Mad News which was published by Ikarion. Mad Burger never made it, but two years later, Mad TV 2 (the only 'official' sequel) appeared - and it sucked. This review is about Mad News, however. The game which should probably be called the only rightful successor of the original game.

Mad News basically starts where Mad TV ended. The player's character made a fatal mistake when he confused his very private program with the show he wanted to broadcast - fired. Fortunately, he gets another chance: as editor of a small yellow press / tabloid publication. Think of the British Sun or the German Bild, only not quite there concerning sales. It's the player's job to establish Mad News (the paper's name) as the USA's most read of its kind. 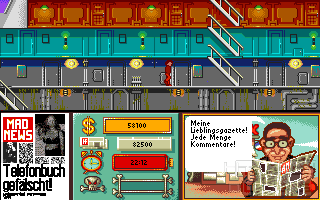 To save money, the offices are located in an abandoned cruise ship which you share with two of your competitors. Apart from this oddity, players of Mad TV will feel right at home: Behind each door, there's an office where you can buy contents for your paper and related stuff. So you're walking around gathering the hottest news, the latest sports results, comic strips and so on, and then carry it all to the heart of the game: your office.

On your computer, you can easily layout your paper's six daily pages via drag & drop. Who needs Pagemaker or any of the other expensive DTP applications anyway? Of course, there are deadlines to meet. Although your paper won't be published until the next day, printing of the pages begins subsequently over the day, and even if you don't manage to fill them up in time, the printer will mercilessly carry on churning out empty pages.

Of course, there is a higher goal behind all of it. Bea, the bosses daughter and the player's wife, might be good-looking, but she's the devil incarnated. Just like you bought presents to woo Betty in Mad TV, you're preparing nasty surprises for Bea in this game. A nice gag, but, like in Mad TV, hardly an integral part of the gameplay. 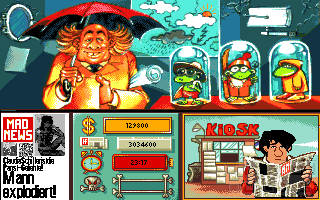 Mad News doesn't have the authentic film titles which made Mad TV so much fun, of course. Instead, it boasts with complete news articles written by the staff of the (by now long out of business) real paper Neue Spezial whose concept it was only to publish articles which where entirely made up. So what you get here are completely insane headlines like “Smoking hazardous: Danger of explosion” or “Does the Pope have a secret lover?”. All the articles can actually be read by the player, and they definitely do get a smile or two.

To make it more interesting, you don't need to rely solely on the news agencies which everybody can access. If you think there's more behind a topic, you can send out your reporters to investigate. In many cases, nothing will turn up, but if they find out the Pope's lover is Claudia Schiffer for example, you've got an exclusive headline...

Some aspects of Mad TV have been toned down a little. For example, the whole aspect of terrorism and sabotage has been removed. Only hint remaining is the Japanese investors who are sending their engineers to another office every day, thus blocking its function. If it's the player's office, bad luck (or stupidity, because you could have bribed them). There is no way to clear rooms completely anymore, but that's not necessary anyway, because a room aequivalent of the studio in Mad TV doesn't exist. 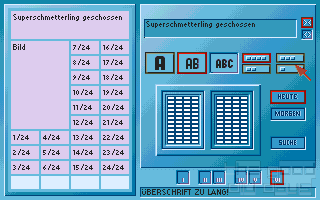 Also, the other two papers are little more than props. They don't seem to be affected by the Japanese at all (if their offices are blocked, they'll still have a filled newspaper the next day which would be impossible for the player) and the sprites walking around the ship don't seem to have any significance (if you block the news room the whole day, for example, the computer players will still get the latest headlines in some way). Bugs or design oversights? In any case, this relegates the competition to the sole function of making the game longer: Bea can't be chased away before you haven't beaten the others.

On the upside, layouting the paper is a little more varied and allows for more creativity than planning the TV program according to Mad TV's predefined roster and there are many small improvements to the game system (for example, it's now possible to change game speed and access the save/load function everywhere). This is essential, because the funny articles alone just don't make it interesting enough. Just like real papers of this kind, it gets repetitive after some time to read articles of the same style all the time. This is where the real meat of the gameplay comes in - and Mad News has more than enough of that to keep the player coming back. No groundbreaking changes, but those weren't necessary anyway. Good work!

Technical notes: Mad News requires 1.5 MB RAM and it has to be installed to a harddrive. There are no further restrictions, a basic OCS machine with Kickstart 1.3 like the A500 is enough. The faster your computer, the smoother the gameplay, of course. 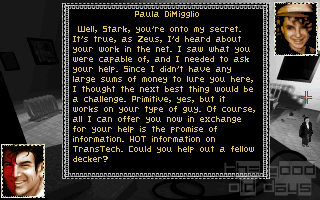