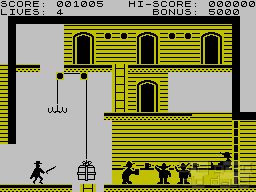 To Z or not to Z, that is the question! Some jealous fiend has seized a beautiful maiden which you have only just begun to admire and dragged her down to the castle for immediate incarceration (sounds like another date went terribly wrong). You pursued them, but just before you know it the drawbridge was raised thus preventing you from going any further. Splendid. It looks like you will have to find another way to sneak into the castle and save your now-sweetheart which may take a few puzzles to solve. In this game you will have to prove that Zorro isn't just a formidable master swordsman but also a brilliant mind!

Out of all Zorro games that I know this one is probably the best. Not that it's unsually good, just that other games are exceptionally bad. Zorro is action & adventure - a very commonplace 3rd person type of Spectrum adventures, which typically includes some precision-based platform action and object-to-object and place-specific interaction. No dialogs, no combat, though with respect to the latter Zorro makes a change, but not much really. The game was also released for CPC, C64 and Atari 8-bit where again Spectrum seems to win the competition by exchanging inferior monochrome palette and lack of background music for swifter and more responsive gameplay. And almost schematic backgrounds with black silhouette-like sprites are really good for what they are.

Your playground is a small town arranged with platforms connected with ladders and ropes. There are also a few springing devices, sliding crossbeams and unsophisticated mechanisms you must operate to achieve various goals. To get into the castle you must collect three essential objects: a chalice, a horse shoe and a boot each of which grants access to another and must be acquired in a specific order. There are other objects here of a secondary designation which only help you get the former three and will be discarded later. Important objects will always blink while secondary are always static. The platform challenge here is pretty weak, though a novice may still have to take a few tries to reach the desired spot and only in a single case it can be really dangerous (well undeground with water below).

Now and then guards dart out of the doorways and may sometimes cross your path which will initiate combat. Though, this game technically includes sword fighting it offers no real experience. To defeat your opponents you only have to press fire, fire, fire and thrust forward and you only die if you're idle for a few seconds. Meaning, your enemies are merely hindrance, no real threat. Keep in mind though, that even they may help you reach your goal in some sticky situations, should you only know how. At the end of the day, this is not a fighting game but thinking, therefore dedicated fencing fans should abandon it immediately and look for a better match.

There isn't much to explore here, the map is pretty small, and almost entirely throughout the game you act within the same limits. It's really about puzzles, not much for an actual journey. Speaking of puzzles, they may seem tough at first but tend to get easier. After solving one mystery things will suddenly start looking up and you will begin to see through the pattern. Needles to say, when it comes to adventures Spectrum has always practised its own minimalistic philosophy which brings about a strange paradox - you often imagine things have to be more complex than they really are and the various attributes alone can suggest all kinds of convoluted ideas. Pure illusion at work, but what a good one!

So my advice to you folks: do not underestimate this and other Spectrum adventures. Or should I say overestimate? Hm.

Moebius:
Feel free to share anything about Zorro (1986) here!
[Reply] 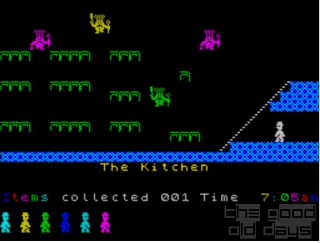