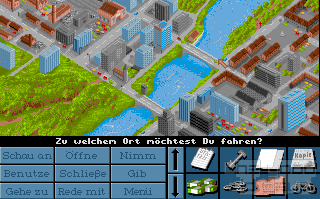 The seminal classic of promotional/propaganda games is back! Das schmutzige Erbe picks up exactly where the first game left off. By renovating your uncle's house in the most environmentally-friendly way, you are now handed 5 million DM. But instead of enjoying your riches, you start to wonder about the key which you also receive. Unfortunately, the safe deposit box at the bank requires two keys. Not that you should care, but wow, mysterious, right? Also, your flame Lolita is a bit pissed, because you didn't phone sufficiently often. That that she should care, now that you're a millionaire, but this is not the real world, alright?

Your first priority is really about getting back into Lolita's pants… heart, I mean! Since this worked so well last time, what you do is invite her over for a romantic dinner at your place (by the way, although you really should, you're not living in your renovated house, but still in your old flat). For this, you have to do some shopping and fix and clean the place up. 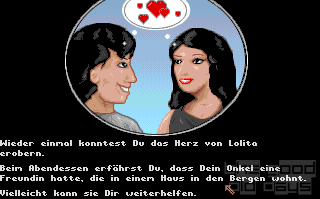 Of course, Lolita appreciates environmentally-minded suitors. So, for example, you buy fresh cheese without plastic wrapping and apparently, you don't even own any cutlery! For transport, you get yourself mocked for buying a bike in a car store and at home, you exchange a light bulb and steam the carpet. Exciting, right? Well, at least Lolita then provides you with a hint where to find the second key…

In quite a drastic departure from the concept of the first part, although the game will still offer wasteful options to buy or use things, it will not actually allow you to select these options. Instead, on selection, it lectures you why this choice is wrong, how this would pollute the environment etc. This saves you (and itself) from the ridiculous scenes where the earth would be completely destroyed by one individual keeping the radiator on, but on the other hand makes the game quite… bland. Not allowing you to make mistakes makes the solution trivial.

The interface, the second annoyance of the first part, has only been lightly improved. The necessary amount of clicks to trigger an action has been reduced, which is good, but what is painfully missing is Lucasfilm's “What is” command to make objects in the scenery discoverable (although the interface is clearly modelled after Lucasfilm's games of the time). Actually, the protagonist sprite will still not even move unless a valid object is clicked on. 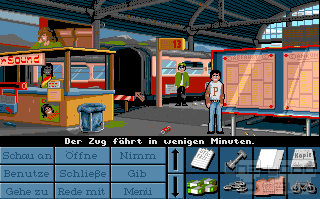 Talking about the sprite moving, for some reason the pathfinding routine seems to work a bit strangely. Although there is a walking animation with the sprite displayed from the side, you will hardly ever see it, because preference is almost always given to the animation from front or back – although the screens are obviously wider than “deep”. So you regularly see your sprite basically walking sideways, which looks really ridiculous.

And then, of course, there is the ending… phew… sorry, I have to spoil it to comment. The safe deposit box contains documents about your uncle's last construction project. Apparently, he made his money in dirty business. The protagonist goes to visit that building and there is a guy from an environmental group protesting in front. You talk to him and immediately hand over all your 5 million to him!

The lesson is probably supposed to be that you don't want to live off dirty money and would rather see it used to repair the damage which was done making it. Very moral, but completely unrealistic! This is so far removed from anybody's real life situation or even remotely possible outcomes that it's just ridiculous (Lolita also being completely taken by this bold decision is just a comparatively minor sidenote).

So in spite of some improvements to playability, the educational message is still not well sold by this game. Just like the overblown death scenes of the first one, this ending is just laughable. A dreamer's world is not a good role model if you want acceptance of your promoted values. 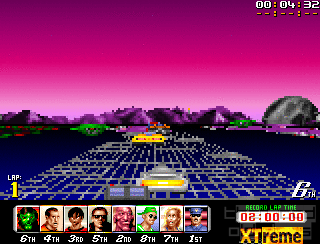