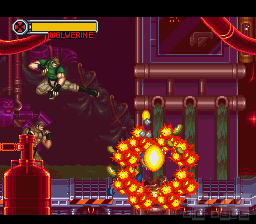 The X-Men are Marvel's most successful team of superheros. And that is actually surprising if you know a bit about the history of this series. It was started back in the mid-60s, like so many others. But the X-Men never really made it, the sales couldn't compare to the Fantastic Four and all the others. So their story ended in 1970: the series was discontinued. No more stories of Professor Xavier, Cyclops, Marvel Girl, Angel, Beast and Iceman. Gone the threat of Magneto, the Juggernaut and the Sentinels.

Well, obviously Marvel reconsidered a few years later and resurrected the series with a new team. It eventually got successful and it's still running today. Many new and old characters have come and gone, were born and died (and resurrected). And that's the way it'll continue until the sales drop again. But now, at the summit of success, the marketing agencies have their big day!

How could one make even more money with the license? Spin-off series' of course. There are more than enough of those: Wolverine, Cable, X-Force, Generation X, The Uncanny X-Men to name just a few. Done. What about other media? A television cartoon? Done. Even a live-action movie has been made and a second is currently in the making! In such a collection, a couple of computer games could not possibly miss.

X-Men: Mutant Apocalypse is one of the better results of a whole bunch of tries many programmers delivered. It uses one of the most common concepts on the SNES: the classic arcade Beat 'm Up. If you've played Double Dragon or anything similar, you know what I'm talking about. In case there are still people who have never really come across these games, I'll give a quick and short explanation.

You, the player, control a sprite on the screen. The perspective is the 2D-side-view. You're walking from left to right and sometimes jump up and down. Your objective is usually to beat up all opponents which cross your way. And since all beings (subtle insinuation that not all are 'people') are enemies, you don't have to think, but just to survive.

In this particular game, you play the X-Men of course. Five characters are included: Gambit, an arrogant French with an annoying accent who has the ability to charge every object with kinetic energy and thus make it explode. He usually (read: this is what he does in this game) uses a deck of explosive playing cards. Psylocke, an English ex-member of Excalibur. She is a telepath (or at least she was when the game came out), but since this is an arcade game, she doesn't need this ability (and I doubt there is a key for it

. Cyclops, one of the original X-Men. He is 'cursed' with his eyes shooting highly destructive optic blasts uncontrollably. Wolverine, a member of the second wave of X-Men after the series was resurrected. He has animal-like senses and (more important for the game) claws made of Adantium on his hands. Last but not least, Beast, another of the original X-Men. He has completely changed his appearance since then though and now actually looks like a 'beast'. He has acrobatic powers.

Professor Xavier sends this team to Genosha (for all non-readers of the series: that's the island where always all the bad things happen to both mutants and humans) where Apocalypse, the oldest mutant alive and of course evil, is enslaving the local 'mutates' (mutants with their mutant genes suppressed). But defeating him isn't enough (read: the designers noticed the game was still to short), so you'll have to go through a lot more and even face Magneto, the X-Men's old archenemy, the Master of Magnetism himself!

The levels are well designed, mostly fair, but still very demanding. They're built with the special abilities of the X-Men in mind, so Beast will obviously get different levels than Psylocke and so on. Later all the ways merge and then choosing the right character brings at least a bit of strategy into it.

What makes this game superior to similar ones then? It's actually playable! What I mean with this is that the player can actually do better or worse according to his abilities. That's rarely seen in those games, mostly you'll just blindly hit the fire button all the time and eventually die without knowing what you could have done better.

And it uses the Marvel license very well. The characters feel and play right. The storyline is a whole mess, just a few floating parts put together and extremely weakly connected. Especially the levels in the middle of the game are very unimaginative, it's obvious that they just wanted to put a few more known names into it. But that's also the case with the actual comic more and more often, so it's excusable.

On the whole, X-Men: Mutant Apocalypse is worth playing for fans of the genre and of course for fans of the series itself. I will go as far as this: if you're a fan of the X-Men, imagine a little higher rating. 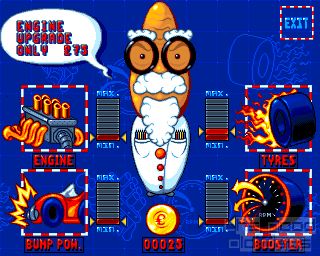