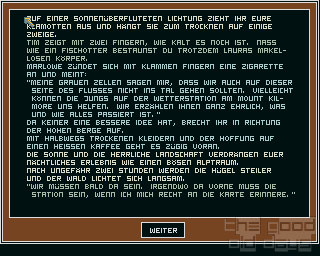 The good friends Tim, Laura and Bernie have decided on vacationing at a resort on a small, remote island, following the recommendation of Kevin who happens to work there. Though things quickly take strange turns. On arrival, Kevin is no there to welcome them. When he's not at the harbour to pick them up, there's no big deal about it yet, but he remains unseen for several days. And then, there is the dead body of an old women wearing her daughter's dress on the beach – slit wrists indicate suicide. Of course, there is a big conspiracy behind it which the young people are going to uncover. 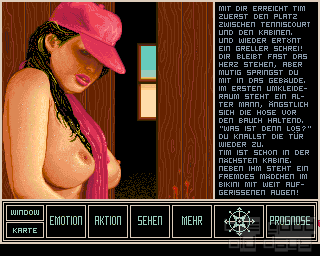 Software 2000 does not deliver just that. Nothing more than a couple of bare breasts and other static illustrations of scantily clad women. Those, however, in quite inappropriate situations: while the accompanying textual narrative talks about a bloody corpse and all the excitement and shock around it, the other half of the screen shows us a topless young woman sensously smiling – huh? Weird priorities which may be quite telling.

At least, everything fits together quite well comparing the gameplay and the contents. Concerning the former, you get the typical Japanese pseudo multiple-choice approach, meaning you keep clicking on the offered options until something new happens. In theory, the choices are actually quite varied: apart from explicit actions, you can also select more subtle options like for example setting moods. Just that about 60% of the choices are not real, because they have absolutely no effect (they are just met with a short, non-progressing text), 10% end the game prematurely and one remaining option acts like a “continue” button. Apart from direct failures or “continue”, the actual gameplay-related choices all fall into the remaining options. These measure the success of the (optional) additional goal of getting Tim together with Laura. And that sub-plot takes place only briefly between statically printed text passages spanning multiple pages at a time. 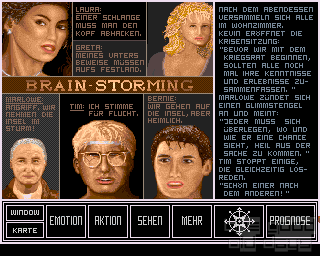 So there is more to read than to play, really. The illustrations accompanying the texts aren't half bad at times, even if especially human anatomy is sometimes slightly off or even bizarre. Musical accompaniment has to be provided by the player herself. Though then, there are the texts themselves… writing style straight from dime novels, full of cheap adjectives and repetitive descriptions. At first, you may be put off by this, but later, you realize that it is actually completely appropriate!

The reason being: the plot can be pretty much described as grown-up Famous Five, complete with paper-thin cliché characters (“hot girls”, “evil villains”), goonish heroics, inappropriate action, absurd twists and a conspiracy which… phew… when the villain's motivation is finally revealed… words fail me!

So with an ironic eye, there are quite a few laughs in here, and since progress is easy thanks to the good interface (the only thing missing is a save function) and low investment of little grey cells, this tourist (I think that is the word they were looking for) is actually entertaining. In this vein, it is worth a recommendation, and those responsible deserve some respect for boldly publishing such schlock proudly as “art” anyway!