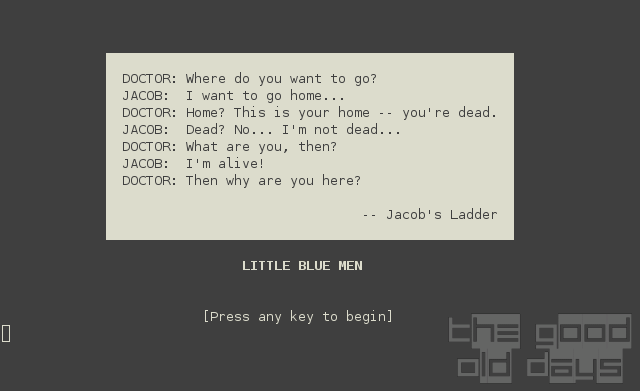 Little Blue Men starts out as any regular office comedy: The neurotic protagonist is stuck in his dead-end job which consists of picking up paperwork from the in-tray, stamping it and putting it in the out-tray. Understandable that he hates his job, his workplace, his co-workers and his boss. Dilbert and Brazil are just two of the obvious influences here. However, there is another level to the game... and for those patient enough to play it to the very end, yet another surprise is waiting.

It has to be allowed to talk about the first of the twists at least without everybody shouting 'spoilers'. Everything quickly becomes quite surreal in an Invasion of the Body Snatchers way. Obviously, this works well on an allegorial level when it comes to the absorbing power of the daily grind, being stuck on a treadmill in a hopelessly boring office job. Not that this is particularly original, but it's always good source of jokes - the references to science fiction and horror staples just add some insider laughs.

Gameplay, although generally working well enough, can't quite live up to the expectations. Dead ends do appear quite regularly, just that the effects are never too fatal, because the game world isn't too large on the whole. What's worse, though, is that the motivations of the protagonist stay a little unclear at times. As far as identifying with a character who is... strange... goes - fine. However, once the player simply doesn't know anymore what to do next, things get bad. Sure, it always becomes clear in retrospect, but that only helps story-wise and not the gameplay.

Back on the subject of the story, the game's final twist (which will not be revealed in this review) makes up for all the trouble again. It is what elevates the game above the usual one-dimensional allegory / satire. Thinking about possible interpretations, in the end, is probably even more fun than playing the game. Not sure whether this is a quality or a downside...