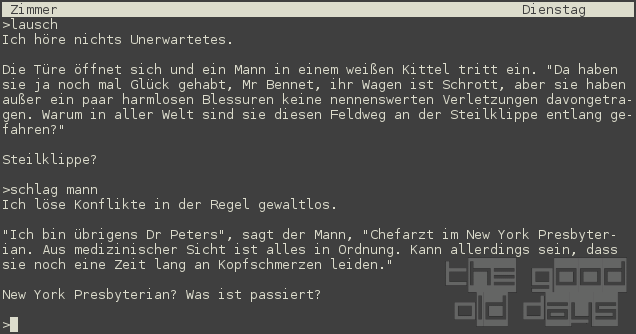 Not many people are still writing classic Text Adventures. Now imagine how few people are still writing classic Text Adventures in German. Those few who do form a small community which even meets in person occasionally, which is always very nice. People support each other during development, with advice, testing etc. What's not so nice is that the group of authors is virtually identical with the group of players. So the risk is always that your whole target audience already played your game during the beta phase! Michael Baltes is probably the most prolific author of German Text Adventures in recent years. His output is by far the most frequent. Due to the aforementioned circumstances, I will never be able to give most of his games a proper review, however. Die Akte Paul Bennet is one of the few games I have not tested in advance and which I therefore only know from pure player perspective. So let's use the rare opportunity!

Set in 1950s New York, the game cites Alfred Hitchcock, particularly North by Northwest as inspiration. Of course, that story of an “everyman” who is drawn into a crazy spy adventure by pure chance is considered “the Hitchcock movie to end all Hitchcock movies”, so this is a high standard to aim for.

Hitchcock described his suspense theory using the example of a cafe where two people sit at a table doing smalltalk. The audience knows that a bomb is about to go off right under that table. The audience, according to Hitchcock, would now want to shout at the screen, warn the oblivious characters. It is this feeling of helplessness which would create nail-biting suspense.

Translating this into an interactive environment is of course fairly hard, because the player is not a passive viewer. He can communicate with the protagonist; in fact, that is the whole purpose of the game. The second facet to Hitchcockian suspense, the gap between audience knowledge and character knowledge, is also hard to translate adequately. Rather, it is usually considered a source of frustration if the player already knows something which he can't make the protagonist “understand”. To pile up even more differences, the game's protagonist is not actually a random victim of mistaken identity, but rather, there is a targeted plot against him going on, as it turns out.

So really, Paul Bennet fails as a Hitchcockian game – whatever that may be. Yet, apart from such an extrinsic assessment, there is always an intrinsic assessment. I.e. not even considering Hitchcock, but playing the game as what it is – a hard-boiled mystery. As such, it works pretty well.

Atypical for him, Michael Baltes refrains from putting in mechanical puzzles just for the sake of it. Rather, the player can concentrate of unravelling the mystery of what's going on: why was he assaulted, who is this Bennet, why does everybody take him for that guy, who is behind this and for what reason? The limiting moment of the game is information, as it should be in the mystery genre. In a rather clever way which does not feel forced at all, the player is organically prevented from entering certain locations unless they learn about them first. The same concept keeps it rather vague whether there could be even more paths through the game, because central decisions are not made explicit. In this case, this is great use of the strength of the medium using free form input.

So what Bennet excels at is interactive storytelling. It never relies on lengthy explanatory text dumps. Instead, it lets the player discover many small pieces of the puzzle (without telling how significant they are) and lets him put them together over various playthroughs. The excellent technical implementation, as typical for this author, encourages this style of realisation, because it makes experimentation and exploration fun. And even if not all the endings make perfect sense from a character point of view (why would the protagonist want to go away?), this is not what counts – it was the way to get there which was tricky, mysterious and ultimately entertaining. 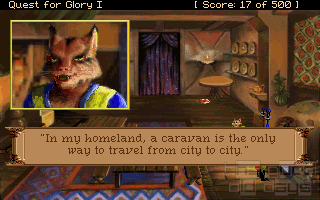