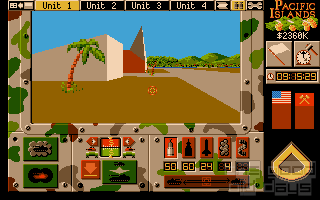 The publisher Empire Software published Pacific Islands in the year 1992 for MS-DOS and thereby created a sequel to the predecessor Team Yankee from the year 1990. The game is a cross between strategy, logistics and tank simulation in which the player takes the role of the western powers in order to liberate a fictive atoll called Yama-Yama from the Sovjets.

For this purpose, the player can separately command 16 tanks, grouped into 4 units, in overall 5 missions with different goals to defeat the enemy. Before you can even send units to the battlefield, though, they have to be bought with in-game money and also equipped with ammunition, grenades etc. During the missions, the player can earn money by destroying communication installations or enemies or fulfil mission goals. This money can then be spent on equipment, weapons or repair of damaged units between the missions.

In order to defeat the enemy, it is possible in the missions' classic cockpit view from the tank to plant mines or call for an artillery strike. During the missions, the screen can be switched in multiple ways:

The lead tank's turrent can, for example, be turned with the mouse, then different weapons can be selected and fired at the enemy units and structures. To navigate the units, they can be sent around a callable map showing different zoom levels in different formations all across the battlefield.

Specialities in battle are usage of smoke granades or the circumstances of having some missions during the day and some others at night. Everybody can activate a night vision device at any time in order to identify enemy units more accurately.

Pacific Islands starts out relatively hard. However, the AI is fairly limited. This is why after a certain phase of settling in, success comes quickly. Compared to the predecessor Team Yankee, little has changed graphically, however.

The extensive manual also serves as copy protection, in which the player has to match displayed tank models with those found in the manual to correctly identify them at the beginning of the game. 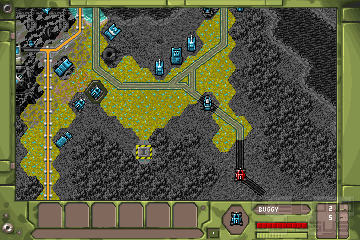