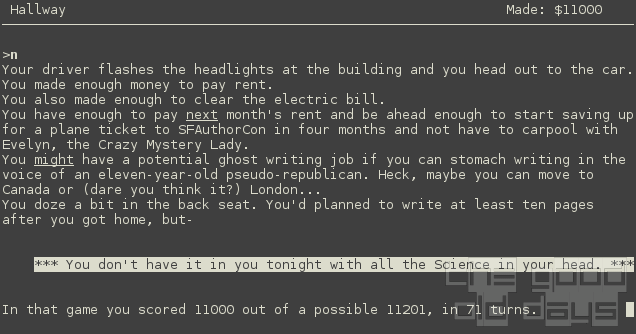 Hanon Ondricek has shown himself to be one of the best text adventure authors of recent years (we have full coverage of Transparent). So expectation are high for this one.

Fair follows last year's (The Baker of Shireton) approach: the player is thrown into an “open world” which can be, explored, used and abused to his liking. This is a special approach to storytelling insofar that it even enables the player to stay away from the classic role of protagonist and just let things unfold around him. There is a number of things going on and which strand of plot he follows is entirely up to the player. I.e. it's much more of an indirect way of storytelling compared to classic player-centric narratives.

The (potential) protagonist here is a third-rate science fiction author who has been called in last minute as an unlikely replacement to judge a local school's science fair (probably because the principal only noticed the “science” and ignored the “fiction”). Of course, his own intentions lean much more into the direction of selling a couple of his books to pay his overdue rent.

Time is short, so the obvious directions would be either to convince some people to buy books (which is simulated in randomized encounters & dialogue) or carefully examine the exhibits, talk to the kids responsible (or their parents?) and finally make an actually relevant choice. Though there is indeed more to discover. The real stories come through observation and conversation, which reveal some of the characters to be cardboard-cut-out-clichés, but others to have a surprisingly interesting side.

The game does a good job of making the busy school hallways come alive. This microcosm is full of colourful characters and little oddities occuring here and there. For instance, the principals plans to show, of all things, The Handmaid's Tale as a rock musical on the school stage. Or his choice of music when presenting the fair awards.

What is surprising on the other hand is that a little bit of polish seems to be missing here and there. For instance, the randomized encouters to sell books, as amusing they may be, often have several inconsistent responses in a row. The principal may even interrupt a sales pitch so that it is not clear anymore which of the two multiple choice conversations threads you will be following with the next choice.

That aside, Fair also shares a typical issue of other games in this genre (compare, for example It from the 2011 competition): in spite of everything, it's a small game. Even though there are many things going on relatively speaking, the player's options will nevertheless be exhausted fairly quickly. Even within the imaginable character interactions, the allowed range is restricted fairly strictly by the game, as almost all actions are mapped to talking. Which maybe begs the question whether non-commercial development of a medium-large scale “open world” game will ever be feasible at all… 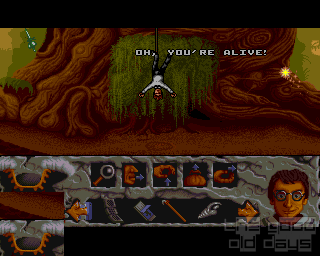