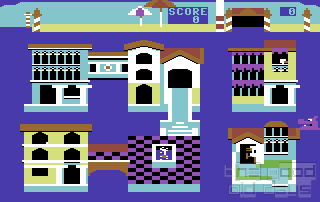 Ducks Ahoy! This was one of the first games I played on the C64. So this may not turn into the most “objective” review I've ever written. The funny thing is: when I picked it up for review again, I did this assuming nobody knew about it anymore – that it had faded into total obscurity. Very brief Internet research proved me wrong. In fact, it seems to be many people's “one of the first games”, as some gushing testimonials document. My turn to chime in.

As many games of the time, this one takes place on a single, static screen. The objective is simple: control a boat around the Venice-style canals in order to save suicidal ducks. Because, you know, although this alternate universe has self-propelled boats and civilised ducks living in houses, those same creatures have lost the ability to swim. I don't think the absurdity of this scenario ever really occured to me back then.

So we have these ducks jumping into the canals and you have to catch them in your boat. Before they jump, they visibly trot through their houses, so you have some time to get there in time. The boat offers place for two ducks at the same time. Having a third one jump in will make it sink, and so will a duck jumping in not at the right angle (occurs when you try and rush there, but don't quite make it). All this not being enough, there is even a malicious hippo swimming around the canals, crashing your boat on contact. If you manage to avoid all these dangers, you can take the ducks to safety at the top of the screen.

Ducks Ahoy! scores with its intuitive, engaging arcade-style gameplay and the duck's funny walking animation, in rhythm with the thematically appropriate music. Playability is good, making it a nostalgic delight, indeed! Though in hindsight and in spite of all the nostalgic feelings, it has to be admitted it is a product of its time. There is only this single-screen level. Once a certain number of ducks have been brought to safety, it all starts over exactly the same way, just a little faster. And so on until you finally fail. There isn't anything to discover which you won't realise within five minutes of playing. The game probably won't get you addicted for a longer period of time anymore, like it did in 1984. Still, it is one of the better ultra-simplistic ones. 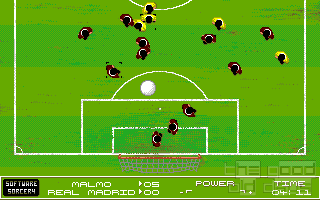