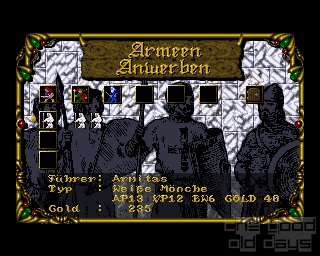 An army is invading a cliché kingdom. Its ruler suspects his illegitimate son Xhor behind it all. Xhor's half-brother Raven cannot believe it, leading to a fall-out with his father and banishment. With few remaining loyal men, Raven now wants to find the vanished Xhor, clear his name and also find and extinguish the real source of these attacks.

Moving away from faceless mass battles in tactical war games is probably what the developers considered. This idea wasn't unheard of in 1994, but still fairly uncommon. So Raven, his close advisor and a couple of additional commander type units can be equipped with weapons and armor role-playing style, they gain experience etc. These commanders can then hire generic units per mission which serve more or less as cannon fodder, as they cannot be moved over to the next level anyway.

Regular units are linked to a commander and receive stats bonuses as long as they stay within the command radius. Another purpose of such links is convenience: commanders can provide orders to their subordinates to follow them or to fight within the vicinity, which saves the player a whole lot of routine actions.

So the commanders have quite a bit of gameplay value, though on the other hand, their loss usually means immediate Game Over. In this vein, the missions are pretty varied: they are rarely just about killing all enemy units. Usually, certain units have to reach specific corners of the map, characters have to be protected or liberated. Though the enemies have the same opportunities: should they manage to kill a central character (e.g. Raven), then it is simply over for the player.

Beyond that, there aren't many more tactical demands. Apart from keeping units within the command radius and minding the terrain, there isn't really anything explicitly influencing the unit stats. Under the hood, gameplay remains rather light-weight.

Nevertheless, the levels are designed in pretty interesting ways, which usually is because of pre-scripted events in the middle of the battle. Which isn't necessarily an issue, but sometimes, it isn't very well balanced. Too often, the player's sound plans are completely thrown off. Apparently, this was noticed during beta testing. Now, the game comes with a diary which actually describes almost all progress through the game, before it actually happens. A half-baked workaround instead of an actual solution.

In the spirit of character and plot development, there is quite a bit to read between missions, though the game doesn't stop there. Even within the missions, characters converse and move the plot forward. You meet additional characters who may turn into allies or enemies. Evil enemies threaten you. You find small hints. This is something you have to be sure to like, because it will interrupt the tactical challenge every time, of course. Particularly as a lot of time is needlessly wasted scrolling back and forth across the battlefield at painfully slow speed. Anyway, the quality of the plot, characters and writing style is up for discussion.

Graphical quality is strangely inconsistent. As it is whispered in shady corners of the Internet, character portraits have been taken from “external sources”, which would explain the major difference compared to the rest of the cut scenes. The main map graphics on which the actual game takes place can probably be called functional.

Difficulty is high – although there are only 16 levels, the game will keep you occupied for a long time. Sometimes for positive reasons (because it is tactically challenging), sometimes for negative ones (because yet another stupid scripted and totally unpredictable event has just spoiled your whole plans). The expansion disk released later even increases the difficulty level further.

Though whether you will play until the very end or not – all told, Death or Glory is somewhat fun. If you like sword & sorcery clichés, all the better. 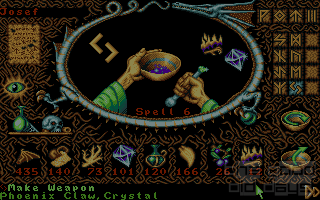