Battle for Wesnoth
for PC 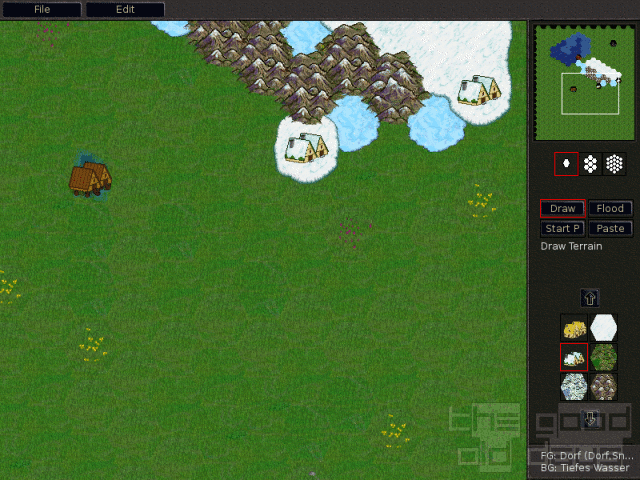 Even people who don't really follow the development in this 'scene' will know that there are countless 'open source game projects' floating around the Internet. Many of them remakes of classic concepts, some highly original. Most are nowhere near a finished state. What you can see on their homepages is usually a 'roadmap' outlining what still needs to be done (pretty much everything), and a few early screenshots. Sometimes, you can even download some kind of 'alpha engine' which doesn't really do anything so far. Experience tells that more than 90% of these projects are abandoned before they've achieved anything.

Battle for Wesnoth is the exception to this rule. It's not only not a complete rip-off of an existing commercial game (although it does resemble Warsong in many ways), but it's also perfectly playable and already very polished. Although there are still additions and fixes, the main part has already been finished several version numbers earlier. So it still does get better, but if you just have one version, you won't notice anything apart from the pre-1.0 version number.

So what is it all about then? Battle for Wesnoth is a tactical wargame. Military units are moved around maps and they're slaughtering each other in turn-based fashion. All that is embedded into different 'campaigns'. Core units can be taken from one level to the next. That's especially important because experience plays an important role. A unit which reaches a certain number of experience points is promoted to a new level. Then, it gets better stronger and sometimes also completely new abilities.

Talking about abilities, that's where the units significantly differ in many aspects. Not only are there units which are stronger in close or ranged combat, but every single one also has a 'moral alignment' which makes it stronger or weaker depending on the time of the day. 'Good' units' stats are boosted under the bright sun, while 'evil' ones strive at midnight. Also, an attack isn't always an attack. There are different kinds of weapons which are more or less effective against different kinds of creatures. A sharp blade might be very effective against human flesh, but against skeletons, it's practically worthless.

The last example already hinted at the biggest downside of Battle for Wesnoth: the cliché fantasy setting. This is of course a very subjective piece of criticism, but I had a hard time standing the stereotype story and the annoying characters (the fact that they're mostly drawn in Japanese 'manga' style didn't exactly help, either).

If you just see it as an abstract game, though, it's excellent. Unit development, interesting missions / maps and an intuitive interface (which is even elaborately explained in an in-game tutorial) all come together here which is all the more impressive in a freeware game.

Because the game is still under constant development, we don't offer a download here. Please see the related links below to find the official homepage from where you can get the latest version for your operating system (many different ports exist). The screenshots have been made with version 0.8.7, the gaming experiences are mostly based on version 0.8.3 and 0.8.4. As of October 2005, version 1.0 has finally been released. Congratulations to the team!

NullVoid (2017-11-04):
The anime-style graphics have been mostly replaced by a more western fantasy novel cover style, with sometimes a bit of impressionism thrown in, for good or ill. Still, the gameplay was solid back then and only growing more so.
[Reply]