Battle Squadron: The Destruction Of The Barrax Empire
for Amiga (OCS/ECS)

Reviewing games belonging to genres which are governed by very strong conventions is not much fun. All too often, you fall back to just going through the motions, performing a mental checklist. Which, not incidentally, is one of the main reasons I rarely dive into shoot 'em ups. It's not a seen-one-seen-'em-all genre, but it is sort of discussed-one-discussed-'em-all. Still, there are some which simply shouldn't go unmentioned. This can be for various reasons, like general popularity, coming from a noteworthy company or even indeed doing something a little different.

Battle Squadron falls somewhere into the first category. On the third point, it follows the established pattern of the vertical scroller very closely: enemies, both airborne and ground-based approaching from all sides, using different attack schemes (suicide, targetted shots etc.) and generally differing in their own toughness, swarm you and you have to be very careful to avoid everything as even just a single hit will destroy your own ship and cost you one of your valuable lives. Exact and anticipatory maneuvering is necessary to fight your way through.

Enemies are quite varied, ranging from moth-like creatures to high-tech fighter ships equipped with cloaking devices. Some enemies will drop power-ups, like smartbombs or regular weapons. The different weapons are well-designed insofar that the “perfect” one doesn't exist; all of them can be upgraded for more power.

The mixture of technology and organic matter found in the enemies spins itself through the whole game, in fact. The level structure has you starting off on the planet surface and entering into three more stages from there. The scenery changes from concrete and metal to pulsating flesh and bone structures.

More importantly than anything, what's nice is that the game is actually manageable. It's challenging, but remains playable and fair. If you pay attention, you can spot additional enemies lifting off in the background, for example, so you'll know where to expect them to come from. This does not go as far as offering the opportunity to destroy them before they can actually become a threat.

Great in-game music and an engaging cooperative two-player mode complete the picture. Battle Squadron does not reinvent the wheel. It takes the conventional building blocks and assembles them into a very entertaining overall package. 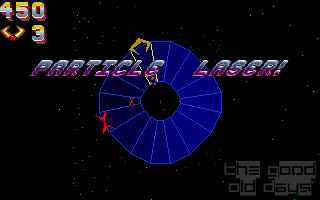