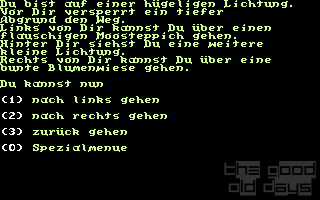 You believed episodic computer game series are a modern-day invention? Even before this concept was put into a first spotlight by Simulmondo in the early 1990s, the German Design Group had a go at it. Probably inspired by the commercial success of the Fighting Fantasy line of books, their Schwert und Magie games show a striking resemblance on many counts at least.

It all begins with rolling your character, defined by some more values than used in those books. From there, we dive nose first into the first adventure. Where nasty monsters are waiting to be fought. Courage, skill etc. will be tested in appropriate situations. And, of course, you will have to find the right path through the adventure. Where one major difference compared to most typical books comes in: GDG's system allows – unless a corridor physically collapses behind you – walking back and forth. Which isn't even done badly, as early identification of the “right” path will simply avoid additional dangers.

On a clearly positive note, each individual story remains fairly short. Practically, there is no danger of ever getting lost of forgetting important plot details in progress – even if you do decide to take a break from playing for a couple of days. Even in the late 1980s, the short play time was balanced by the appropriately low price (10 DM, i.e. roughly 5€ in today's currency, for two episodes).

Being the first part of a planned product line, Das geheimnisvolle Kraut suffers from typical birth symptoms. First, the plot concerning a dying king for whom the adventurer is supposed to procure a rare healing herb from the forest in which a witch is living, is pretty exchangeable. A lame “plot twist” towards the end effectively makes no difference; it all stays on the level of the simpler ones of Grimm's Fairy Tales. Second, it is fairly apparent that this episode, likely also used to pitch the concept, compulsively tries to show off all features of the engine. Meaning that some events are not integrated all that organically or even linked to anything at all.

Though you could also interpret the same observations in a positive way: Das geheimnisvolle Kraut gives players a good overview what they can expect of the series. Its prose is mostly to the point, the player choices are clear. Occasional little in-jokes make you overlook some writing weaknesses. Challenge is limited and success not far. None of this is in any way related to the title screen, but in the end, who cares?